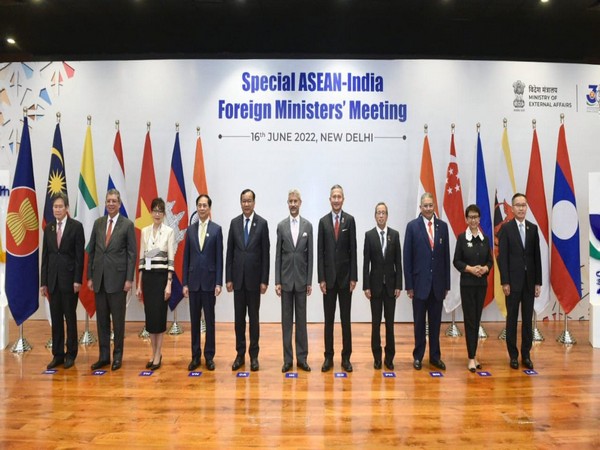 New Delhi: India and ASEAN countries on Thursday agreed to deepen strategic partnership across the whole spectrum of political, security and economic and development cooperation as the two sides commemorated the 30th Anniversary of ASEAN-India Dialogue Relations.

The Special ASEAN-India Foreign Ministers' Meeting was held in New Delhi today to commemorate the 30th Anniversary of ASEAN-India Dialogue Relations in 2022 which has been designated as the ASEAN-India Friendship Year. External Affairs Minister S Jaishankar and Singapore Foreign Minister Dr Vivian Balakrishnan co-chaired the meeting.

The meeting agreed to further strengthen and deepen the ASEAN-India Strategic Partnership for mutual benefit, "across the whole spectrum of political, security, economic, socio-cultural and development cooperation by utilizing relevant existing ASEAN-led mechanisms".

According to Co-Chairs' Statement, the meeting noted the millennia-old civilisational and cultural linkages between Southeast Asia and India. It recalled the milestones of the ASEAN-India Dialogue Relations over the last three decades and reaffirmed its commitment to further deepen this broad-based partnership.

Appreciating India's firm commitment to ASEAN Centrality in the evolving regional architecture, the meeting welcomed India's support for the ASEAN Community-building process, including through the support for the projects.

Acknowledging the importance of joint efforts to address the continuing challenges posed by the COVID-19 pandemic, the meeting appreciated the mutual assistance extended by ASEAN Member States and India to each other.

The meeting agreed to achieve the full potential of ASEAN-India trade and economic partnership including through enhanced utilization and effective implementation of the ASEAN-India Free Trade Area (AIFTA) by the early commencement of the review of the ASEAN-India Trade in Goods Agreement (AITIGA) to ensure that it is more user friendly, simple and trade facilitative for businesses.

The meeting also decided to strengthen regional connectivity, including both physical and digital, and explore synergies between the MPAC 2025 and India's connectivity initiatives under India's Act East Policy, in line with "Connecting the Connectivities" approach.

It was also agreed to develop an open, secure, interoperable and user-empowering digital connectivity ecosystem, in view of the importance of digital platforms for improved access in areas such as healthcare, education, finance.

The meeting reaffirmed the commitment to multilateralism founded on the principles of international law including the Charter of the United Nations, the 1982 United Nations Convention on the Law of the Sea (UNCLOS).