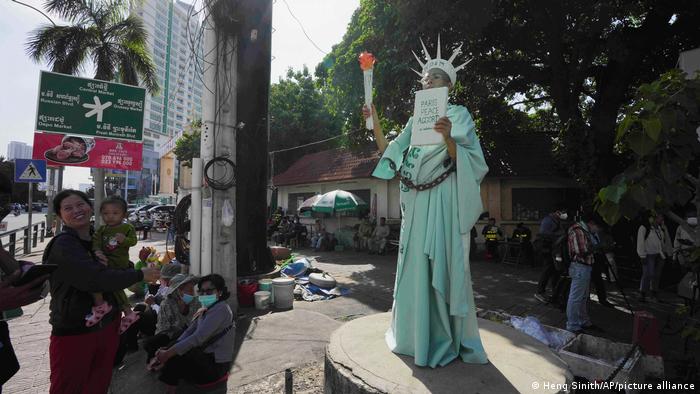 A Phnom Penh court convicted a Cambodian-American lawyer and scores of members of an opposition party for treason on Tuesday.

Lawyer and activist Theary Seng and more than 100 people affiliated with the dissolved Cambodia National Rescue Party (CNRP) were previously charged with treason and incitement.

Before her sentence was passed on Tuesday, Seng stood outside the court, dressed as Lady Liberty in a light green gown and a crown with "Freedom" written on it. She was seen shouting "free the political prisoners."

Seng predicted that the regime led by Prime Minister Hun Sen would "not let me go free."

"It will be an unfair and unjust verdict because I am innocent, the others charged with me are innocent," the 51-year-old added.

The media and onlookers saw at least three police officers approach Seng, hold her, and push her into a police truck soon after the verdict. The trial is being seen as the latest move to curb opposition in the Asian country.


The German lawmaker in the Bundestag Renata Alt, from the pro-business Free Democrats (FDP) and leader of the committee on human rights and humanitarian aid, condemned on Tuesday the "prison sentence given to the lawyer and human rights activist Theary Seng by a justice system controlled by the authoritarian strongman Hun Sen."

"The conviction on the grounds of alleged high treason is a draconian punishment and a bitter result following the disputed proceedings," Alt said.

"It is just one of many absurd convictions," she added.


After the verdict, Seng's lawyer Chuong Choungy said he would file an appeal.

"This is not acceptable and I will meet her in prison to discuss appealing," he told reporters outside the Phnom Penh municipal court. Accouding to Choungy, Seng is only one of about 60 co-defendants who had been sentenced to between five to eight years in prison.

Seng has been sentenced to six years in jail. Many of the 60 defendants earlier fled to exile or went into hiding, and it wasn't immediately clear how many appeared in court for the verdict Tuesday.

Seng has a history of using costumes to publicize her opinions about the status of democracy in Cambodia. She has previously worn a white dress and carried a balance to portray Lady Justice, and has also appeared in orange clothes resembling those of a prisoner.

Hun Sen in power for close to four decades


Cambodian courts are widely believed to be working under the influence of Sen, who has been in power for 37 years.

The CNRP was his party's biggest rival before it was disbanded by a court ruling just ahead of national elections in 2018. Its founder Kem Sokha has been accused of conspiring with the US to overthrown Sen. The claims have been denied by Sokha and Washington.

Sen has stated his intention to stay in office until 2028 and has endorsed one of his sons to succeed him.

Opposition leader Sam Rainsy has been in exile in France since 2016 to avoid serving prison sentences on defamation and other charges he says are politically motivated. He has received an eight-year prison term in absentia.