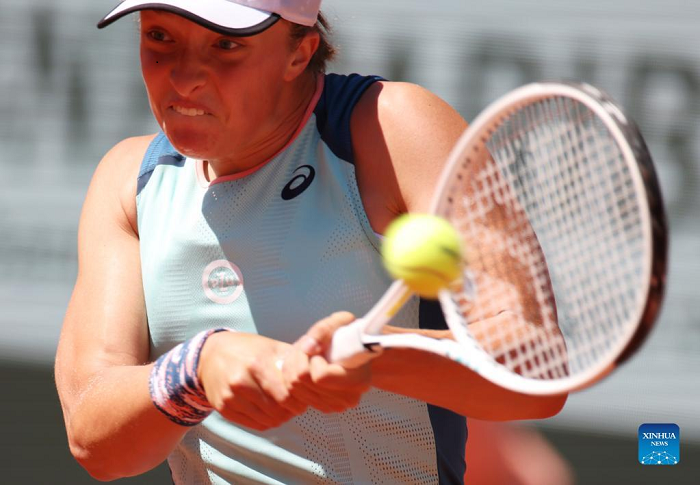 Paris : World No. 1 Iga Swiatek who stormed into the final of the French Open 2022 praised 21-time Grand Slam champion Rafael Nadal's humility and feels he is "still the same great person" despite all the success that has come his way.

No.1 seed Iga Swiatek's winning streak hit 34 after she dispatched No.20 seed Daria Kasatkina 6-2, 6-1 in just 64 minutes to reach her second Roland Garros final. Speaking moments after the semifinal against Daria Kasatkina on Thursday, the Pole expressed her respect and admiration for Spaniard.

She explained the impact he has had on her, with his behaviour both on the tennis court and off it.

"Oh my God, he is inspiring me in basically every aspect, both on the court and off-court because he's so humble and down to Earth and he's that kind of guy that is always saying 'hi' and that is amazing because it seems like the successes haven't changed him and he is still the same great person," Swiatek said in her on-court interview.

The 21-year-old revealed that she has not seen Nadal play live as often as she was busy due to the needs of her own routine.

"I have seen a few matches live as it is not always possible because I was also in tournaments but when I watched this year's Australian Open final, oh my God, it was just overwhelming really," Swiatek said.

"Even I had doubts and I could see how he was trying to find solutions and get better throughout the match and he did and he won so he is a huge inspiration. Not only here, but on every court, it is great to watch him play," she added.

Speaking after her semi-final game, an emotional Swiatek spoke about the support she has received from her nation.

"Pretty special moment. Yeah, I'm really emotional. I'm so grateful to be in this place and you know, be healthy and be able to play my game. It's amazing and I love playing here," said Swiatek.

"Right after my first year there was COVID and I was not able to see how many Polish people would come. It's overwhelming," the word number 1 talked about the support she received in the court.

Coco Gauff will face world number one Iga Swiatek for the French Open title after the teenager eased into her maiden Grand Slam final with a straight-sets victory over Martina Trevisan on Thursday. The 18-year-old American claimed a 6-3, 6-1 win in a match which saw both players featuring in a semi-final for the first time.

Gauff is the youngest Grand Slam finalist since Maria Sharapova won Wimbledon in 2004. "I think I'm a little bit in shock right now. I didn't know how to react after the match. I'm lost for words," said Gauff after the match.

"I wasn't nervous going in today, I haven't been nervous all week which is a surprise. I go for a walk in the morning which clears my head and, after that, I feel great," she said.

Notably, restricting the surprising run of unseeded Italian Martina Trevisan in Thursday's semifinals, Gauff, who turned 18 in March, is the youngest player to reach the final in Paris since Kim Clijsters in 2001.

Further, Polish player Iga Natalia Swiatek is currently ranked world No. 1 by the Women's Tennis Association and is the youngest player ranked in the top ten. Swiatek was the champion at the 2020 French Open and is the first player representing Poland to win a Grand Slam singles title.