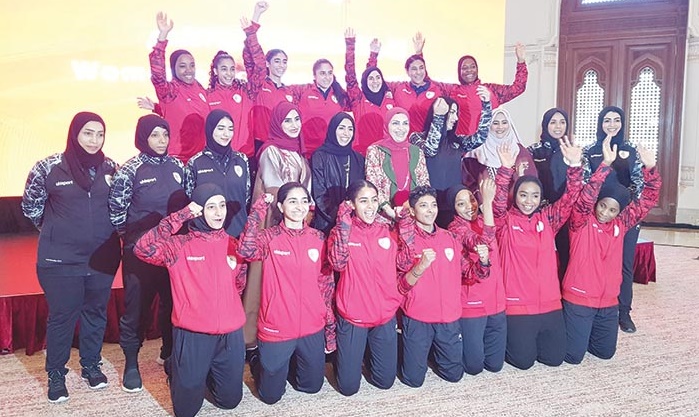 Following an internal training in Oman, the team will travel to Italy in June for more preparation and conditioning, and then head to Saudi Arabia to take part in an Asian-level tournament, its first major test.

Muscat: The Sultanate’s newly-formed women’s national football team has burning ambitions to make the country proud at international level, and hopes to even one day play at the World Cup.

Consisting of 18 players hand-picked from the best football clubs across Oman, the women in this team hail from all across the country: from Musandam in the north, to the Dhofar in the south, and cannot wait to enter their first official tournament, which begins next month in Saudi Arabia.

“There is a lot of ambition and a lot of belief in this team,” said Oman Football Association board member Hon. Lujaina Mohsin Darwish, at the official launch ceremony of the national team, and chairperson of the OFA’s Women’s Football Committee. “When I talk to these players, we see that they have great ambition, and that all of their ambitions are the same: they want to make this country proud.”

“I ask, therefore, that whoever lives in Oman support these young women, so that they go with the backing of the full country,” she added. “Of course, it is our dream to one day play at the World Cup, but these things take time, and we have just started out, so we need to take the evolution of our team forward step by step.”

Plans to form a women’s team were drawn up when Lujaina was elected to the board of the OFA in August 2021. Soon afterwards, a tournament was held featuring 14 women’s teams from the 50 clubs across Oman to headhunt the best players and form the national team. 40 women were shortlisted from among the participating teams, from among whom 18 were selected for national duty.

Following an internal training and practice camp involving three friendly matches in Oman, the team will travel to Italy in June for more preparation and conditioning, and then head to Saudi Arabia to take part in an Asian-level tournament, its first major test.

“We will be going with the team, first to Italy and then to Saudi Arabia, to support them all the way,” added Lujaina, who also thanked His Highness Sayyid Theyazin bin Haitham Al Said, the Minister of Culture, Sports and Youth, for his efforts to encourage and develop football and other sports in Oman.

“The Oman Football Association has been among the key beneficiaries of the interest displayed by His Highness Sayyid Theyazin in providing more attention to sport in the country,” she said.

“It is good that we have a young minister who can provide fresh impetus and new ideas to develop sports in Oman. I want to thank him and the ministry for their endeavours in creating more opportunities for people in sport, as well the entire board of the OFA, and all those who have supported us on this journey.”

Players from the national team also understand what it means to pull on the red shirt of Oman, and be among the select few chosen to represent the country.

“My father was a former player for Oman’s national youth team, so I learned the importance of representing my country from him…its significance has not been lost on me,” said Afrah Al Mahrouqi, who plays as an attacking midfielder for the national side.

The 19-year-old, originally from Al Mudhaibi in South Ash Sharqiyah, was introduced to football when she was just a toddler: “I am the eldest in my family, so my father used to play with me whenever he had time, and would take me to the beach to play sports.

“Opportunities like the formation of this women’s team are amazing for young girls in Oman, because it means they can show their talents on the world stage,” added Al Mahrouqi, who counts US women’s soccer team player Alex Morgan, and Portuguese sensation Cristiano Ronaldo as her inspirations.

“It would be amazing if we could one day play at the World Cup, and represent our country at the highest stage.”

Team spirit in the squad is also very high: to see it in action, look no further than the treatment provided to Naira Al Amri, who at 15, is the youngest player in the team.

“When it is time for academics because I have my exams around the corner, the entire team will encourage me to study, because they know how important that is,” said the winger, who counts Ronaldo and Brazilian attacker Neymar as her favourites. “When they find out that I haven’t had lunch, they will chide me gently and remind me to eat.

“The team togetherness here is just amazing: we all look out for each other, we have each other’s back, and we all want the team to do well,” explained Naira, who comes from Al Maabela. “Because I attended a private football academy alongside school, I am able to juggle schoolwork and sports. Although it is a great honour to be selected for the national team, it is extremely important that I remain humble, because there is plenty of hard work ahead of us.

“When I go to school and my classmates hear that I play for Oman’s national team, I am often greeted with surprise, while others look to me for inspiration,” she added. “All of us are role models for the other girls in the country, so what I would say to them is that if you have the talent and the passion, you will succeed in your chosen field…just go for it.”