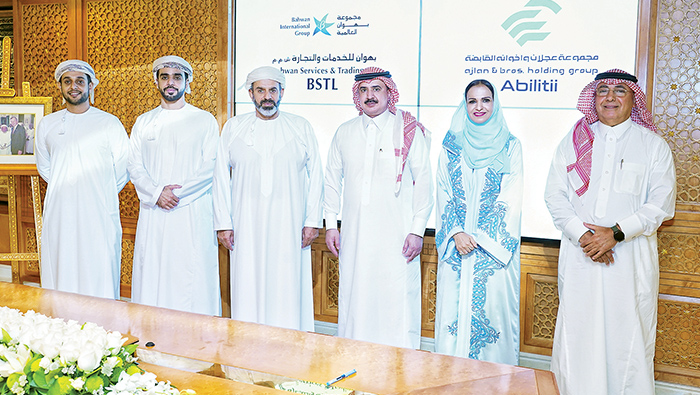 Muscat: Bahwan Services and Trading (BST); an affiliate of Sheikh Ahmed Suhail Bahwan’s group of companies, Sultanate of Oman and Ajlan & Brothers Holding Group (Abilitii), Kingdom of Saudi Arabia have signed a collaboration agreement to establish joint investments in both countries; by announcing a new era of partnerships for key sectors in line with respective countries’ Saudi Vision 2030 and Oman Vision 2040.

The Sultanate of Oman and its brotherly Kingdom of Saudi Arabia, under the leadership of His Majesty Sultan Haitham bin Tarik Al Said and his beloved brother - the Custodian of the Two Holy Mosques King Salman bin Abdulaziz Al Saud, King of the Kingdom of Saudi Arabia and alongside dynamic young leader HRH Prince Mohammad bin Salman, are witnessing enormous momentum in economic and investment cooperation between two countries in various sectors after the mutual visits of strong leaders along with officials and businessmen during 2021. The trade between two nations is continuously on the rise.

BST and Abilitii, privately owned, well-known, highly respected and reliable business conglomerates met in Muscat on May 24, 2022, to sign an economic, commercial, and technical collaboration agreements. The various projects of mutual interests come under the field of industrial manufacturing of lithium-ion batteries for electric vehicles and stationary energy storage, renewable energy, healthcare and food security initiatives in both countries and joint investments within and outside the GCC.

The move aims to strengthen existing economic relations between two groups by developing effective programme and mechanisms for collaboration in efforts for all future projects of mutual interests for initial five years and thereafter. Both groups will co-operate and work together in the fields of trade, investment, knowledge exchange, and facilitate joint economic efforts during the next stage, thereby promoting sustainable economic development in both countries.

During the ceremony, Sheikh Ahmed Suhail Bahwan emphasised that this agreement will pave the way for a joint economic co-operation between the two countries in line with respective countries visions for future growth. This partnership with Abilitii is being built on the principles of flexibility, openness, and international economic collaboration in various vital sectors for self-substantiality, new technologies and to invest together in future economic growth sectors.

Sheikh Ahmed Suhail Bahwan’s group of companies have been operational in automobile sector in Saudi Arabia for more than 12 years and now aspiring to expand into other business along with its trusted partner - Abilitii.

Sheikh Mohammed bin Abdulaziz Al Ajlan said: “Led by the Custodian of the Two Holy Mosques, King Salman Bin Abdulaziz and the Crown Prince, His Royal Highness Prince Mohammad Bin Salman, Saudi economy reported huge growth at all aspects, in addition to the true vision of His Majesty Sultan Haitham bin Tarik Al Said, the economy of Sultanate of Oman is strongly placed to grow at rapid rate, as per IMF’s latest prediction highest in GCC at 5.6 per cent in 2022. We believe, Sultanate is a prominent economic destination for investments and an important trade partner of the Kingdom in the GCC.”

Abilitii is eager to be part of this growth story and commit itself to partner with the well-respected BSTL. Abilitii by teaming with a local trustworthy partner wants to collaborate on various identified projects with an investment potential of about $3 billion in near future. The signing of this new collaboration agreement is a milestone in the economic relations between the two countries. We will continue this collaboration and our efforts in future to achieve shared goals of both the organisations, in line with the economic development aspirations of both the countries to create local employment and self-substantiality in key sectors.”

Both groups have agreed to place industrial manufacturing, renewable energy, future technologies, innovation, modern agriculture, digital economy, education, healthcare and food security, as the top priority sectors of mutual interests in line the visions for 2030 (of Saudi Arabia) and 2040 (of Oman).