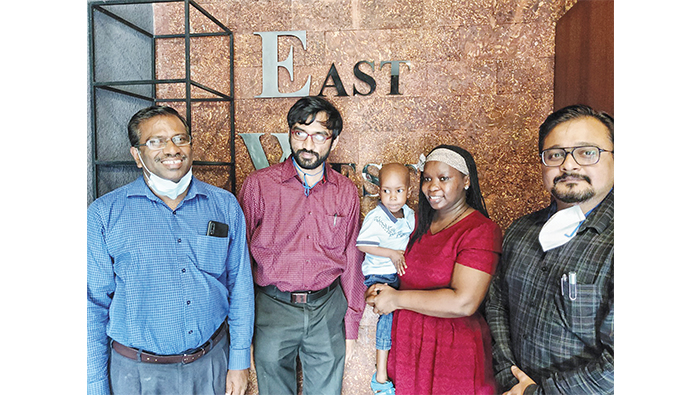 Muscat: For the first time in the history of North Kerala, a two-year-old Ugandan child was rescued by performing a bone marrow transplant at Aster Mims Calicut.

Rose Wataka, Mother of two-year-old Philip, who was suffering from sickle cell anaemia, came to Kozhikode Aster Mims for treatment. Before arriving in Kozhikode, they had researched in detail in different parts of the world about getting the best treatment. Dr. Kesavan, leading Paediatric Hemato Oncologist in Kerala led the treatment.

The search for a suitable bone marrow began after it was decided that a bone marrow transplant was the only cure for Philip, who was suffering from excruciating pain, recurrent infections, frequent hospitalisations and blood transfusions.

Brother Thomas’ hematopoietic stem cells were infused in Philip’s body after he was given chemotherapy. Philip was discharged from the transplant unit after recovery of his counts.

“He is currently 2 months post stem cell transplant. Philip is completely relieved from the sickle pain crisis and also to the need of hospitalisations. Philip can now lead a normal life like any other child,’’ Dr. Keshavan said.

“It is a matter of pride that people from all over the world come to Kozhikode in search of more complex cases like bone marrow transplants. “

“In addition to those in the Gulf countries, patients from foreign countries like Afghanistan, Bangladesh and Uganda have started choosing Kozhikode and Aster Mims as their first consideration. We are proud of this,” said Farhan Yasin, Regional Director, Aster Group Kerala & Oman.