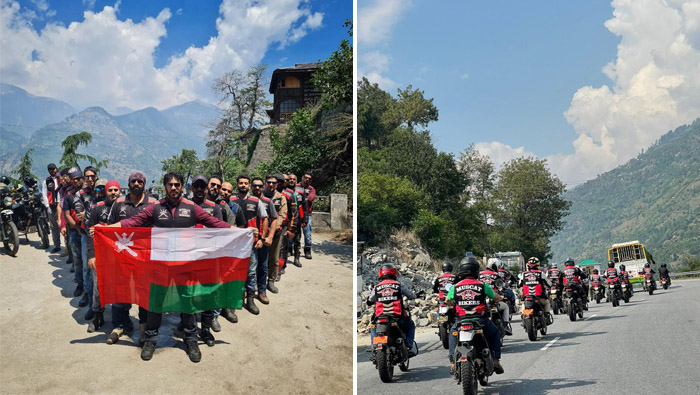 Muscat Bikers Club had an annual plan of organising domestic and international tours to showcase and promote the Sultanate in general and its tourism in particular.

Muscat: In their second fifteen-day tour to India, members of Muscat Bikers Club have so far clocked 1,500 kilometres, spanning five states, each with its unique topography and demography.

Taher Al Zadjali, Chairman of Muscat Bikers Club said the second tour which started on 5 May would cover over 2,000 kilometres. The tour started from New Delhi and would cover five states and regions across the country, he added.

He said the bikers have traversed long distances under different climatic conditions and topography, including mountain areas and clogged cities having traffic jams. The team, which comprised 21 members of the Muscat Bikers Club flew to India and hired motorbikes to start one of the most fascinating and adventurous tours that familiarised the team with India’s unique ethnic, social and cultural diversities, he said.

He said the Muscat Bikers Club had an annual plan of organising domestic and international tours to showcase and promote the Sultanate in general and its tourism in particular. The tours also aimed to promote peace, security and stability in the Sultanate, besides its diverse topography, including its plains, wadis and mountains as also to acquaint the people of different countries with the Sultanate’s cultural heritage, tolerance, security and stability.

India was chosen on account of the historic and friendly relations between the two countries, he said adding that this was the second tour to India, the first taking place in 2019.

This tour was financed by contributions from the organizers. However, we hope the future tours would receive government support and that of the private sector as well because such tours aimed to promote the Sultanate abroad, he said.


During the tour we were touched with the appreciation and respect the Indian people had for the Sultanate of Oman, besides the respect they accord to late His Majesty Sultan Qaboos bin Said and to His Majesty Sultan Haitham Bin Tarik, he said pointing that the Indian people view the Sultanate and India as two friendly countries enjoying strong historical ties.