Indian priest thanks His Majesty after rescue from Yemen 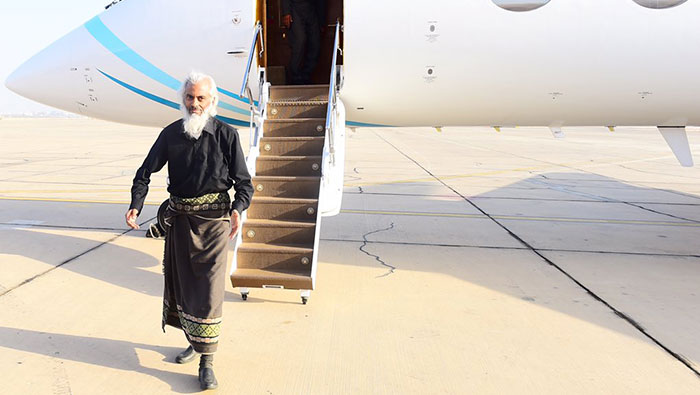 Muscat: An Indian priest kidnapped after an attack on a care home in Yemen’s southern port city of Aden in 2016 has been freed and flown to Oman, the government has revealed.
Also read: Rescued Indian priest's family 'happy that he is free'
Father Tom Uzhunnalil was abducted in March 2016 when four gunmen posing as relatives of one of the residents at the home burst inside, killing four Indian nuns, two Yemeni female staff, eight elderly residents and a guard.
The Sultanate helped to find and rescue the Vatican employee, the government said.
“In response to the Royal Orders of His Majesty Sultan Qaboos bin Said and as per a request from the Vatican to assist in the rescuing of a Vatican employee, the authorities concerned in Oman, in coordination with the Yemeni authorities, have managed to find a Vatican government employee.”
He was transferred this morning to Muscat, the government said. Tom Uzhunnalil thanked the Almighty and His Majesty the Sultan, and wished him good health and wellness. He also thanked his brothers, sisters and all relatives and friends who prayed for his safety and release, the statement added.
Father Tom reached Rome on Tuesday night, according to a Catholic church spokesman in Bengaluru. A member of the government of the Vatican City, Uzhunnalil worked at an old-age home, founded by Mother Teresa’s Missionaries of Charity, and had spent 17 months in captivity.
India's ambassador to Oman Indra Mani Pandey was pleased to see Uzhunnalil freed. “We are aware that he has been freed, and are happy that he is now out of danger,” said Pandey.
“We would not like to share any more details about this at this time, and will wait for the Government of India to make a statement.”
Indian External Affairs Minister Sushma Swaraj also expressed relief on his release, saying, “I am happy to inform that Father Tom Uzhunnalil has been rescued.”
Kerala’s Chief Minister, Pinarayi Vijayan, added, “The news of the release of Fr. Tom Uzhunnalil, who was in the captivity of terrorists, is heartening. Wishing him well.”
The Apostolic Vicariate of Southern Arabia, which oversees the welfare and development of churches in the UAE, Oman and Yemen, was also relieved to see father Tom out of danger.
“We gratefully thank all those who prayed for the safe release of Fr. Tom. More details are awaited and will be released when available,” they said in a statement.
“Thank the Lord and all those who worked on this.”
In May, a video of the Indian priest was posted online and he was seen in poor health, calling for help.
“They are treating me well to the extent they are able,” the white-bearded Uzhunnalil said, speaking slowly in English. “My health condition is deteriorating quickly and I require hospitalisation as early as possible,” he added in the recording.
The date April 15, 2017 was written on a piece of cardboard pasted on his body.