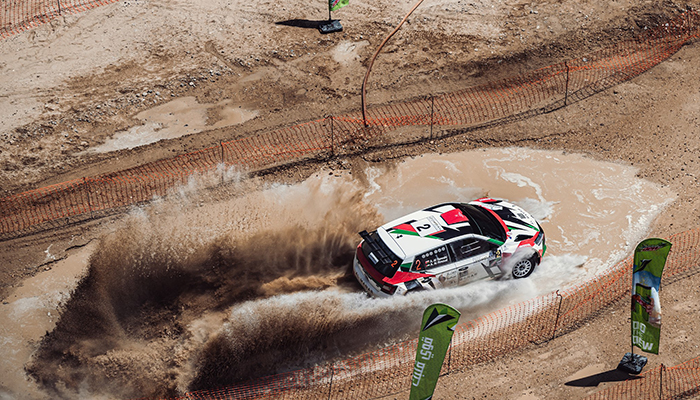 Dead Sea (JORDAN): Oman’s Abdullah Al-Rawahi held second overall after four stages of the 2022 Jordan Rally before an accident put paid to his determined challenge for honours on Friday.

The Omani and his Jordanian co-driver Ata Al-Hmoud had overcome the punishing heat, abrasive rock and dusty conditions to guide their Oman Rally Team Škoda Fabia R2 evo into a strong position at the halfway point of the fourth round of the 2022 FIA Middle East Rally Championship (MERC).

Al-Rawahi was second fastest on each of the opening three stages and shadowed leader Nasser Saleh Al-Attiyah. He reached the service stop at the Dead Sea, trailing the Qatari by 43.8 seconds. But the duo had pulled away from the rest of their rivals and continued to do so through the re-run of the Yakrut stage.

However, the Omani’s brave drive came to an end in the second pass through the marathon Jordan River special. He left the road in the gruelling Jordan River stage, one of the most difficult in the Middle East rallying calendar and was not able to continue for the remainder of the day.

The first of two passes through the Bahath stage (12.69km) gets the action underway on Saturday morning. Competitors then tackle an 11.08km stage at Suwayma and the 17.00km of Ma’in 1, before returning to the service park before midday.

The three specials will then be repeated in the afternoon, while the podium finish is scheduled for 16.30hrs adjacent to the Dead Sea.