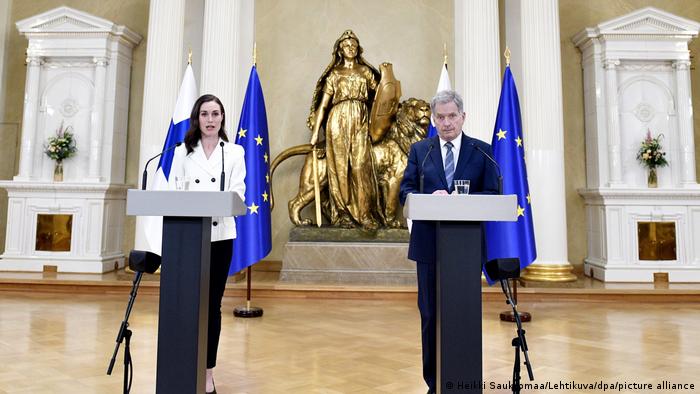 The Finnish government on Sunday formally announced that it will apply for NATO membership after the move received the backing of the country's ruling political party.

The Finnish parliament is expected to greenlight the decision in the coming days.

The decision, coming in light of Russia's invasion of Ukraine, signals a stark U-turn for the country's long held neutral stance.

President Sauli Niinisto said he agreed with the government and consulted with the parliament before announcing the decision.

"This is a historic day. A new era is opening," Niinisto told a joint news conference with and Prime Minister Sanna Marin.

"We have had wars with Russia, and we don't want that kind of future for ourselves, for our children, and this is why we're making these decisions today and in the upcoming weeks, so there will never again be a war," the Finnish premier said.


Sweden's governing Social Democrats on Sunday were also expected to announce their support to join NATO.

The Swedish Social Democrats have long been against NATO membership, but Russia's invasion triggered a debate in Swedish society about joining the defense alliance.

German Foreign Minister Annalena Baerbock said Berlin wants to speed up the ratification process if both Sweden and Finland desire to join the defense alliance.

The ratification period can typically take as long as a year.

"If these two countries are deciding to join, they can join very quickly,'' Baerbock said.


At the same time, NATO member Turkey has expressed opposition to the two Nordic countries joining the bloc.

Turkey accuses Sweden in particular of leniency toward the Kurdistan Workers' Party (PKK), which is on the EU's list of terrorist organizations.

On Saturday, Turkey's Foreign Minister Mevlut Cavusoglu said it was "unacceptable and outrageous" that the prospective new NATO members supported the PKK.

A day later, Cavusoglu called on Sweden and Finland to stop supporting the PKK, provide security guarantees and lift export bans on Turkey.

Niinisto said he was "a bit confused" about what he said was a shift in Ankara's stance.

"What we need now is a very clear answer, I am prepared to have a new discussion with President Erdogan about the problems he has raised," Niinisto said.

NATO's deputy secretary-general said Sunday that the alliance is confident that it can form a consensus with Turkey on the issue.


Russia has vowed retaliation for steps toward NATO expansion.

On Saturday, the Finnish president said he told his Russian counterpart, Vladimir Putin, about Helsinki's plans to join the Western alliance.

According to the Kremlin's statement, Putin told Niinisto that Russia posed no threat to Finland, but that membership in NATO could negatively affect the countries' relations.

Niinisto had said earlier that "joining NATO would not be against anyone."

Although Helsinki remained militarily non-aligned for 75 years, the Finnish public opinion shifted amid the war Ukraine.