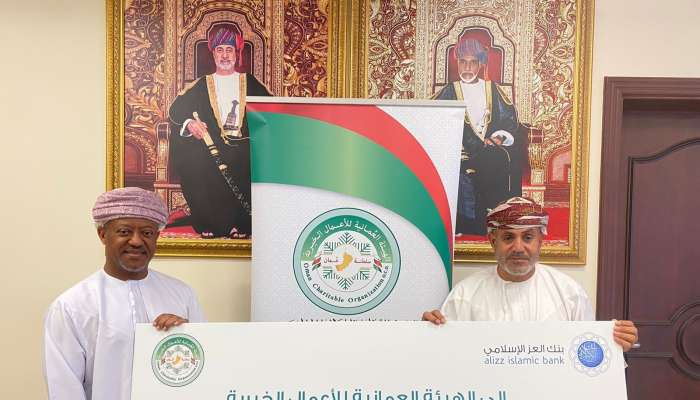 Prior to the handover of the amount, a meeting was held between both sides todiscuss details of the Organization’s activities and the role it plays towards the community with regard to receiving and collecting donations, gifts and other obligatory and voluntary charity in order to help those in need. Also discussed was finance projects that care for children, orphans or the elderly, support and social welfare projects and programs that benefit citizens and provide urgent aid (relief) to victims of disasters, fires or accidents, whether individuals or institutions, inside and outside the Sultanate. The Organization also offers aid to social and charitable institutions and the poor and the needy inside and outside the Sultanate. The bank’s CEO was also briefed on the programs administered by the Organization, such as educational, medical, and food aid programs, as well as orphans and needy families’ support.

It’s noteworthy that the bank’s social responsibility policy is aligned with its mission of achieving exceptional and sustainable results for our shareholders. In this regard, the bank launched several projects that have a positive impact on society by creating value for everyone. Since its inception, Alizz Islamic Bank has focused on investing in our communities with a view to providing a better life for the people it serves across the Sultanate, in addition, it believes that investing in sustainable initiatives is critical to achievingthe welfare of society. The Bank has offered strong support to effective national organizations that seek to build strong and flexible communities; and has contributed to the growth of non-profit social organizations.

Alizz Islamic Bank has recently entered into voluntary partnerships to support various social initiatives, under direct supervision by the CEO, such as building the Centre of Excellence for Children with Disabilities and collecting donations for orphans of the Child Care Center. In addition, it is collaborating with a number of associations to engage employees in voluntary work.

The bank implemented various social responsibility programs, such as a direct donation of OMR 150,000 to the Shaheen emergency fund supervised by Oman Charitable Organization, launching a relief and food campaign to support those affected by the Cyclone, with the participation of a large number of volunteers from all over Oman to distribute aids to those affected. The bank also provided accommodation and support to our customers who were directly affected by the cyclone.

Moreover, the Bank recently had its flagship “IftarSayem” initiative for the eighth consecutive year, to hand out Ramadan boxes, filled with essential food items, to low-income families in the communities we work in. The Bank also supported the efforts of the Ministry of Social Development by providing students from Low-income families with the advanced technologies they need in order to access the distance learning platforms that schools resorted to due to the pandemic, as the Bank donated 50 laptops and 10 tablets to the Ministry to ensure that these children can continue their education.