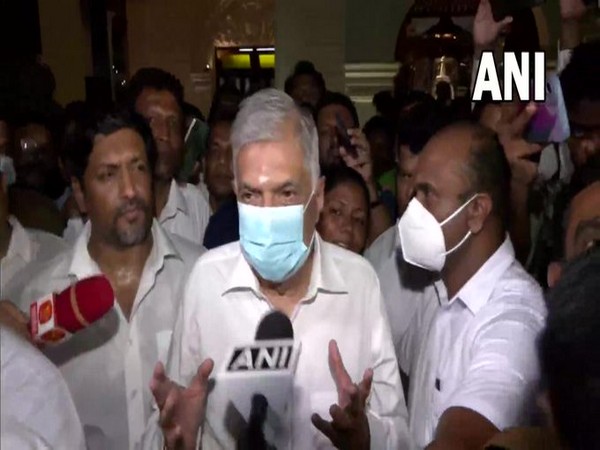 In a letter, the newly appointed Prime Minister urged the opposition party Samagi Jana Balawegaya (SJB) leader Premadasa to join hands and stand united in order to create a stable economy in Sri Lanka, reported Colombo Page. "The only option left to liberate the country from the present situation is to bring the country to a stable level with the maximum strength and commitment of all of us on this new political path," he said.

Upon inviting the opposition to join hands, the Prime Minister called on for collective efforts in order to reinforce the social, economic, and, political environment with the help of the international community to overcome the problems faced by the people.

Expressing hope, PM Wickremesinghe said that he expects a positive response from the Leader of the Opposition Sajith Premadasa on this invitation to form a non-partisan government in the country, as per the media portal.

Earlier, Premadasa in a letter to newly appointed Prime Minister Wickremesinghe said that solutions to the economic and political crisis must be found in accordance with the wishes of the people.

"The Samagi Jana Balawegaya (SJB) and Samagi Jana Bala Sandanaya (SJBS) are of the opinion that in finding a solution to the most serious economic and political crisis facing our motherland in history, solutions must be found according to the views and wishes of the people on the earth," the letter reads.

On Thursday, United National Party (UNP) leader Ranil Wickremesinghe was sworn in as the new Prime Minister of Sri Lanka amid the worst economic crisis faced by the country that has seen violent anti-government protests.

Meanwhile, the anti-government protestors in Sri Lanka established a new protest site at the temple trees near the residence of the Prime Minister of the country to rally against the alleged political deal made between President Gotabaya Rajapaksa and newly appointed premier Ranil Wickremesinghe.

Protests in Sri Lanka have continued virtually unabated even as Mahinda Rajapaksa resigned on Monday, followed by the appointment of Ranil Wickremesinghe as the new Prime Minister of the economically devastated island nation on Thursday.

Sri Lanka is facing its worst economic crisis since independence with food and fuel shortages, soaring prices and power cuts affecting a large number of the citizens, resulting in massive protests over the government's handling of the situation.

The recession is attributed to foreign exchange shortages caused by a fall in tourism during the COVID-19 pandemic, as well as reckless economic policies including the government's last year's move to ban chemical fertilizers in a bid to make Sri Lanka's agriculture "100 per cent organic".

Due to an acute shortage of foreign exchange, Sri Lanka recently defaulted on the entirety of its foreign debt amounting to about USD 51 billion.

The economic situation led to huge protests with demands for the resignation of Prime Minister Mahinda Rajapaksa and President Gotabaya Rajapaksa, with the former finally succumbing to public pressure and resigning on Monday, soon after the protests outside the Prime Minister's residence turned violent.