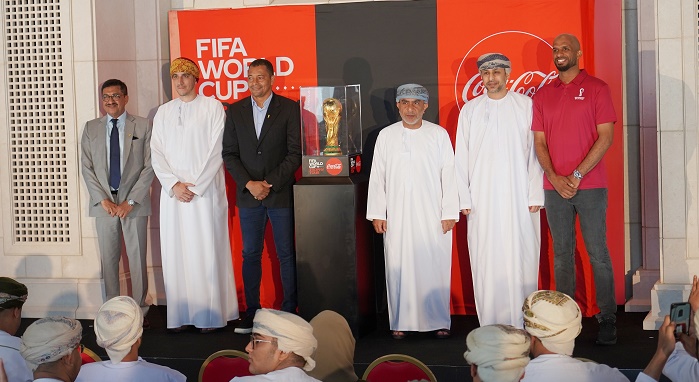 Muscat: Football fans in Oman spent a good part of Friday evening queuing up outside Royal Opera House Muscat for a sneak peek at the FIFA World Cup trophy, which came to the country as part of a promotional tour ahead of the 2022 version of the tournament.

The 2022 FIFA World Cup, which will be held in Qatar in November and December this year, is the first tournament in the Arab region, and the promotional trophy tour includes stopovers in a number of Arab countries such as Bahrain, Kuwait, Lebanon, the UAE and Saudi Arabia, before reaching the host nation.

The trophy was available for public viewing from 5pm to 9pm, but Hasan and his two football-mad sons were in the queue at 4pm, having driven all the way from Sohar.

“For a tournament as iconic as this to come to the Gulf is just amazing – we are used to the World Cup being held in Europe, so now we understand how football fever grips them,” said Hasan, who is a Brazil supporter, just like his boys.

The hot weather, with temperatures rising to 40 degrees during the daytime and remaining in the thirties as the sun sets, did little to deter fans of the beautiful game from seeing the World Cup trophy first-hand.

“I have been watching the World Cup ever since I was a child,” said Yasser, who supports Spain. “To be able to see such an iconic piece of sporting culture that has inspired millions around the world, is just amazing. In a way, I am a bit sad that the World Cup is not being held this summer, because that would mean it is just a month away. Nevertheless, I am sure that when the tournament does begin, it will be spectacular.”

Although there were many who got a chance to check out the World Cup, as well as the opportunity for innumerable poses, others sadly could not make their ambitions a reality owing to misunderstandings over reserving a spot to see the trophy: An online booking system had been set up for people to buy tickets for the showpiece event at ROHM, but many claimed they did not know such a facility even existed.

“Like myself, many of those who turned up were confused by the presence of the ticketing system, as we were not even aware of the same,” said Manoj, an expatriate who came with his wife and child. “There was no mention of it online, and no way to buy tickets at the venue. There were many others – locals and foreign nationals alike – who were unable to enter the venue because of this situation.”

Fortunately, a kind Omani gave an extra ticket to Manoj’s son – a Germany supporter – while the organisers were able to arrange for his wife and himself to check out the trophy.

“Truly, this was a once in a lifetime opportunity, and I am glad my family and I were able to experience it,” he said.
The FIFA World Cup trophy came to Oman on Friday afternoon, accompanied by former World Cup winner Gilberto Silva, who was part of the victorious Brazil team of 2002.