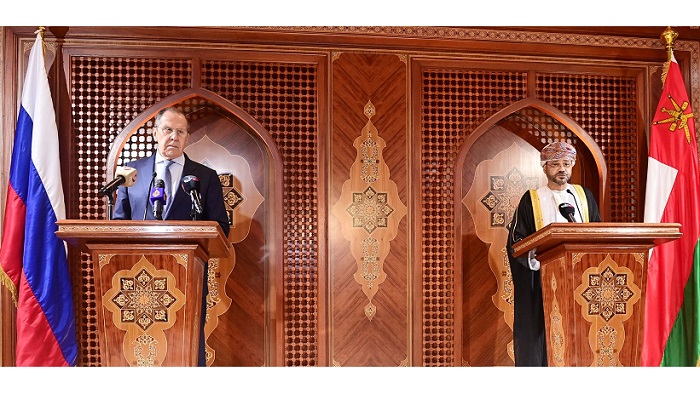 The Russian Minister said, "During my meeting with officials in the Sultanate of Oman, bilateral relations and economic cooperation were discussed, as well as raising trade exchange between the two countries."

The Russian Minister added that Russia seeks to enhance trade cooperation with Oman in order to raise the volume of exchange to meet the aspirations of both sides.

"We agreed with the Omani side to expand a package of bilateral agreements, including mutual exemption of visas for citizens of the two countries, and a cooperation agreement between the Russian Museum and the Omani National Museum," the Russian Minister said.

"The Omani side was briefed on the latest developments in Russian operations in Ukraine and their geopolitical dimension," the Russian Foreign Minister added.

His Excellency Sayyid Badr bin Hamad Al Busaidi, Minister of Foreign affirms that the Sultanate of Oman supports all international efforts that work to make the negotiations of the Iranian nuclear file a success. He said that we do not blame any party for disrupting the negotiations, but we support dialogue and direct talk.

"We discussed with the Russian side many issues of common interest, as well as a number of regional and international issues," Oman's Foreign Minister said.

His Excellency the Minister of Foreign confirmed that the Sultanate of Oman is following with great interest the situation in Ukraine and calls on all parties to exercise restraint and resolve differences peacefully in order to avoid aggravating the situation.

Al Busaidi added that the Sultanate supports all international efforts, especially the efforts of the United Nations, which aim to enhance security and stability in the region.

The Russian Foreign Minister describes Oman's position on the Russian-Ukrainian war as "balanced".