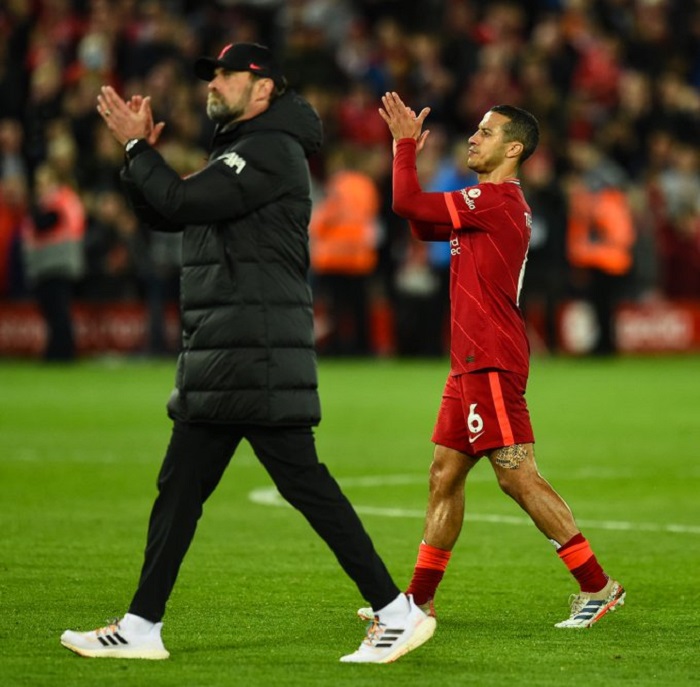 Liverpool were lacking a bit of freshness after their draining Champions League semi-final win in Villarreal on Tuesday night.

LONDON: Manchester City have the chance to move three points clear at the top of the Premier League if they can beat Newcastle United at the Ethiad Stadium on Sunday after Liverpool were held to a 1-1 draw at home to Tottenham on Saturday night.

Liverpool were  lacking a bit of freshness after their draining Champions League semi-final win in Villarreal on Tuesday night, but still managed 22 shots to Tottenham's eight during a tense match.

Son Heung-Min put Tottenham ahead in the 56th minute, but Luis Diaz leveled with a deflected effort with 15 minutes left to play.

The draw also means that Arsenal can open a four-point advantage over Tottenham ahead of next week's North-London derby if they can beat Leeds United on Sunday.

Manchester United cannot qualify for next season's Champions League after being humiliated 4-0 away to Brighton.

Moises Caicedo opened the scoring for the home side in the 15th minute and after Marc Cucurella doubled the home side's advantage in the 49th minute, United fell apart with Pascal Gross and Leandro Trossard adding further goals in the 57th and 60th minutes.

The visiting supporters ended the match signing, "you are not fit to wear your shirt," to the United players.

Watford's relegation to the Championship was certified by a 1-0 defeat away to Crystal Palace, with Wilfred Zaha's 31st minute penalty sending down former Palace coach, Roy Hodgson's current side.

Burnley's survival hopes suffered a huge blow as their three-game winning run came to an end with a 3-1 defeat at home to Aston Villa, who led 3-0 through goals from former Burnley striker Danny Ings, Emiliano Buendia and Ollie Watkins, before Maxwell Cornet netted an injury time goal for the home side.

Pontus Jansson and Yoane Wissa scored in the 13th and 14th minutes to put their side on track to a comfortable 3-0 win at home to Southampton, with Kristoffer Ajer adding a third goal with 11 minutes still to play.

Chelsea seemed to be enjoying a placid afternoon at home to Wolves to celebrate the announcement of the takeover of the club, as they led 2-0 thanks to two goals from Romelu Lukaku.

However, Wolves came to life after that Francisco Trincao pulled a goal back in the 79th minute and Conor Coady nodded in an equalizer in the seventh minute of injury time.