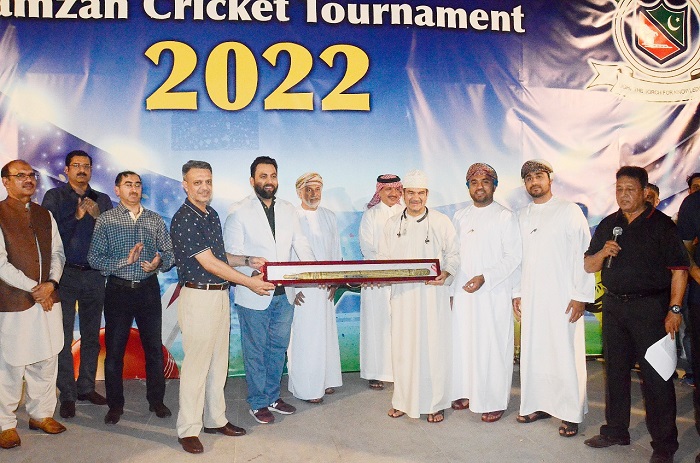 Muscat: Asfandyar XI defeated Smile Strikers by 8 wickets in the final of Ramadan cricket tournament on April 27. Pankaj Khimji, Chairman of Oman Cricket, was the chief guest overseeing the proceedings along with Saudi Ambassador Saud Al Anzi who was the guest of honour.

Smile Strikers won the toss and elected to bat first with their player Tauseef produced one of the best batting displays scoring 83 runs in just 26 balls with 10 sixes. Shahbaz too played a quickfire 22 runs in just 11 balls. Smile Strikers scored 124 runs with the loss of 4 wickets. Amir and Zaheer got a wicket each

In reply, Umer and Ghazanfar of Asfandyar X1 started strongly with Umar scoring 45 runs with 6 sixes in just 14 balls while Ghazanfar score 30 runs in 8 balls with 4 sixes. Remaining Asfandyar XI batters chased down the score with ease with the loss of only 2 wickets and clinched the trophy

Pankaj Khimji presented Asfandyar team captain with a glittering trophy while the runners-up trophy was presented by the Saudi Ambassador to Matiur Rehman, the captain of Smile Strikers. Tauseef was declared Player of the Tournament and Umar was chosen man of the match.

A beautiful memento was presented to Pankaj Khimji by Chairman of School board Ameer Hamza who also presented a souvenir to Saudi Ambassador and Chairman of Times Of Oman, Mohamed Issa Al Zadjali

Pankaj Khimji lauded the efforts of Chief Organiser Jameel Zaidi who organized this event in a very short span of time with great success.