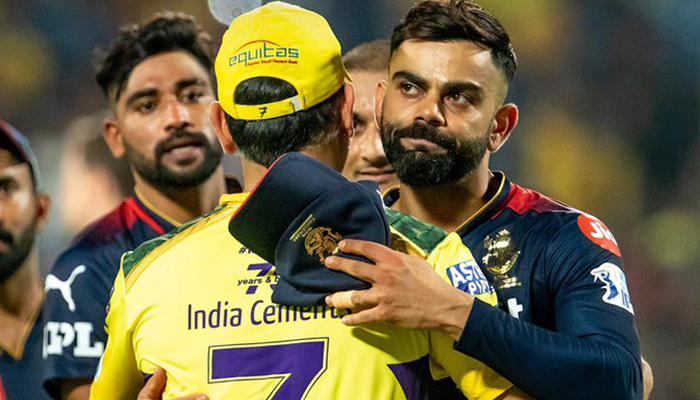 Fighting knocks from Devon Conway (56), Moeen Ali (34) and Ruturaj Gaikwad (28) kept hopes for CSK alive but were not enough to outplay Bangalore as a unit as the bowlers outdid the batters in Yellow. Shahbaz Ahmed (1/27), Josh Hazlewood (1/19) and Wanindu Hasaranga (1/31) also delivered with the ball for RCB. With this win, RCB are now at the fourth spot in the points table with 12 points and CSK is ninth position with six.

Chasing 174, Chennai Super Kings got off to a great start with openers Ruturaj Gaikwad and Devon Conway rotating the strike consistently and hitting fours and sixes regularly. Conway, in particular, looked in great touch.

The duo completed their fifty-run partnership in the sixth over of the game. At the end of the powerplay, CSK stood at 51/0, with Gaikwad (27*) and Conway (24*) standing solid.

After the powerplay, RCB struck gold in the seventh and eighth over. Shahbaz Ahmed broke the 54-run partnership between Gaikwad and Conway by dismissing the former for 28 with assistance from substitute SS Prabhudessai. Just after that, Maxwell dismissed Robin Uthappa in the eighth over for 1 as Prabhudessai once again delivered it for RCB with his fielding.

This brought an experienced Ambati Rayadu to the crease. The CSK batter's struggles with spin continued as Maxwell clean-bowled Rayadu for 10 in the tenth over when the team's score was 75.
At the end of 10 overs, CSK stood struggling at 77/3, with Devon Conway (37*) and Moeen Ali (1*) at the crease.
However, Conway continued to look good and justified his inclusion in the team by hitting his second consecutive half-century in just 33 balls with five fours and two sixes.

The duo gave sought to give momentum to the innings after three hiccups just after the powerplay but the efforts were disrupted yet again as Wanindu Hasaranga dismissed Conway for 56 off 37 in the 15th over with score at 109. Shahbaz Ahmed took a good catch at the deep backward square leg to dismiss Conway.

The dismissal brought all-rounder Ravindra Jadeja to the crease to join Moeen Ali. Smashing Hasaranga for a six over the long-on, Ali ended the 15th over on a high, with the scoreboard reading 118/4.

The equation was down to 56 runs off 30 deliveries. Harshal delivered the 16th over and ended it with a bang after dismissing Jadeja for 3. He was caught by Kohli. This brought MS Dhoni, playing his 200th game in Yellow jersey, to the crease.

Moeen Ali continued to fight back the RCB's onslaught smashing Harshal Patel for a six at the first ball of the 18th over. However on the very next ball, a slower delivery, he was dismissed for 34, with Siraj catching the ball at the extra cover region.
This brought Dwaine Pretorious to the crease. At the end of 18th over, CSK needed 39 off 12. There could not have been a start more perfect for Hazlewood in the 19th over, as he removed Dhoni for 2 as he was caught by Patidar.

In the last over, CSK needed to pull a herculean effort to get 31 runs. Pretorius kept hopes alive with a six on the first delivery off Patel's final over before he was caught by Kohli at the very next ball. Despite best efforts, CSK fell 13 runs short of what would have been their fourth win in the season.
Put to bat first, RCB had a great start to their innings as they scored 57 runs in the powerplay, with skipper Faf du Plessis and Virat Kohli smashing runs from both the ends. Their partnership finally broke after Moeen Ali dismissed du Plessis, who departed after scoring 38 off 22 balls with RCB's total at 62/1 in the 8th over.

Glenn Maxwell joined Kohli at the crease but could not stand at the crease for long as he was run out by Robin Uthappa in the ninth over with only 3 runs in his kitty. It was followed by another setback for RCB as they lost the wicket of Kohli in the same over after he had scored 30 runs.
Mahipal Lomror and Rajat Patidar came to the crease and provided RCB with some momentum. The duo anchored the innings for some time and took their side above the 120-run mark in the 15th over.

CSK then got another breakthrough when Dwaine Pretorius sent Patidar back to the dugout, with RCB's total at 123/4. Dinesh Karthik came to the crease and along with Lomror, changed the momentum of the game.

Lomror played a quick knock of 42 runs off 27 balls before getting caught by Ruturaj Gaikwamd on Maheesh Theekshana's delivery in the 19th over. It was followed by Wanindu Hasaranga's dismissal on the very next ball, reducing RCB to 155/6. Shahbaz Ahmed also got bowled out in the same over with only 1 run to his name.