In his own words: Omani hero's race against time as ship sank 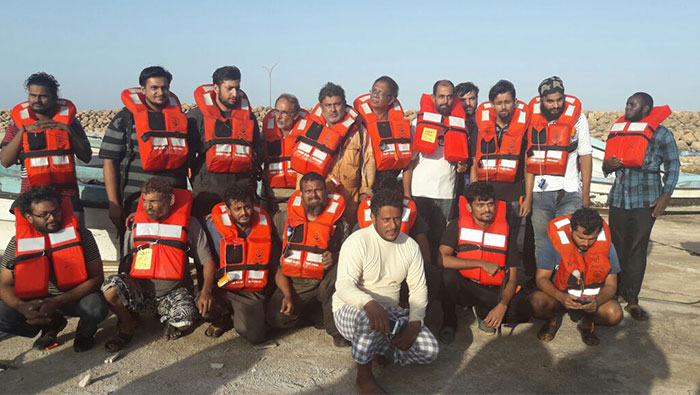 Muscat: The Omani hero who raced to rescue 20 crew members from their sinking ship has spoken about the moment he received the SOS call.
Twenty crew members of a Tanzanian registered cargo ship were rescued by Omani Good Samaritan Fayiz Al Junaibi, who raced to the rescue with two fishing boats after he received a call from a crew member.
"A commercial ship carrying the Tanzanian flag sank in Omani territorial waters just before the port of Al-Labki in Wilayat Jazir after sailing from Sharjah to Eritrea," ROP said in a statement.
The ship was carrying "building and steel materials and 20 crew of different nationalities who were rescued by a citizen and handed over to the Jazir police station," the statement added.
The crew were taken to "Al Jazir Hospital for tests, they are in good health. The local agent in the Sultanate was contacted to complete their deportation procedures," ROP added.
Omani hero Fayiz Al Junaibi, a resident of Soqra in the Wilayat of Al Jazir in Al Wusta Governorate, told Times of Oman that he had gotten a call from someone on the ship on Friday, saying that the ship had a hole on its side — with water coming in fast.
"On Eid day at 9am, a Pakistani man who worked on the ship called me and told me that he had a problem with his boat engine. I took him for a distance of two miles and helped him. The next day he called again and asked to help him with engine.
"At 2pm yesterday afternoon he called, told me to take more petrol, just in case.
"At 2:30pm yesterday the Pakistani man called and told me that the ship is sinking. I left with two fishing boats along with my worker, and reached after 25 mins. I reached and tried helping the 20 people. At 4:45pm, I called the coastguard to come and help, and by 5pm all the authorities arrived. I personally sent one crew member to Al Jazir Hospital in my own car.
"When I got there I tried to rush. I could not contact the authorities straight away because the wind speed was nearl 35 knots and the sea was rough so they wouldn't be able to hear me."