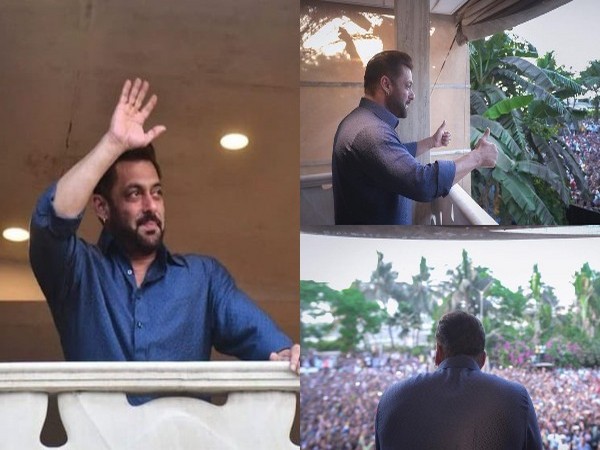 Mumbai: Keeping up with the annual tradition of greeting his fans on the special occasion of Eid, Bollywood superstar Salman Khan appeared on his balcony at Galaxy Apartments in Bandra.

His fans swarmed in large numbers lining outside the superstar's residence, waiting to get a glimpse of the 'bhai' of Bollywood.

Salman appeared on his balcony upon the fans' demand, waving and greeting his fans, who had been waiting patiently to see the actor gracing the occasion of Eid. The actor donned a navy-blue kurta and sported a beard similar to his look in the film 'Tiger Zinda Hain.'

Salman took to Instagram to wish his fans nationwide, sharing pictures from the special day, captioning the post "Wishing all Eid Mubarak!"

With the special appearance of Salman and Shah Rukh from their respective residences today on Eid, fans from Bollywood have certainly received their 'Eidi' in the best possible way.

Meanwhile, on the work front, Salman is to be next seen in 'Kabhi Eid Kabhi Diwali' alongside Pooja Hegde, Shehnaaz Gill and Ayush Sharma, helmed by Farhad Samji, which is scheduled to release on December 30, 2022.