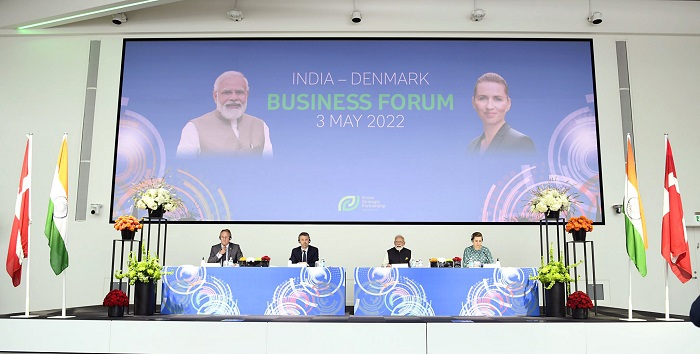 The signing of the agreements was witnessed by PM Modi and his Danish counterpart Mette Frederiksen in Copenhagen. According to the Ministry of External Affairs (MEA), the nine agreements include letter of intent between the Ministry of Ports, Shipping and Waterways, GOI and the Ministry of Business, Industry and Financial Affairs of Denmark on Centre of Excellence in Green Shipping.

A Declaration of Intent (DoI) on Migration and Mobility was also signed.

The MEA said that the letter of intent (LoI) between Ministry of Jal Shakti and the Ministry of Environment of Denmark was also signed between the two countries.

They also signed MoU on Cooperation in the field of Skill Development, Vocational Education and Entrepreneurship.

Agreements on Joint Declaration of Intent (JDI) on Cooperation in the fields of Animal Husbandry & Dairying, and Launch of Energy Policy Dialogue at Ministerial level, were also inked.

Moreover, both sides also signed agreements on India to join as mission partner to ICARS (International Centre for Anti-Microbial Resistance Solution), and letter of intent between Invest India and Technical University of Denmark to facilitate start-up collaboration.

PM Modi on Tuesday reached the Danish capital for a one-day visit. This visit to Denmark started shortly after his Berlin visit.

During the delegation-level talks, the two prime ministers agreed to maintain regular high-level interactions in the run-up to the 75th anniversary of bilateral relations in 2024 and agreed to commemorate it in a befitting manner.