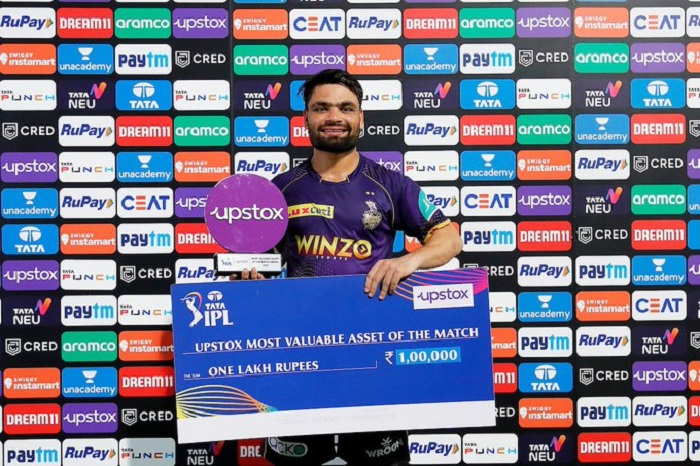 Most Valuable Asset of the Match between Kolkata Knight Riders and Rajasthan Royals is Rinku Singh.

Mumbai: Nitish Rana's and Rinku Singh's quickfire unbeaten knocks of 48 and 42 steered Kolkata Knight Riders to a comfortable seven-wicket victory over Rajasthan Royals at their IPL match at Wankhede Stadium here on Monday.

Chasing a tricky 153-run target, Kolkata Knight Riders' openers did not get the best of starts as Rajasthan's right-arm pacer Kuldeep Sen dismissed Aaron Finch and rattled his stumps on the third ball of his over. Prasidh Krishna dismissed opener Baba Indrajith after he had scored 15 runs in 16 balls leaving KKR's total at 32/2. Nitish Rana along with skipper Shreyas Iyer batted sensibly to take the team's score beyond the 50-run mark in the 9th over. The duo stitched up a much-needed partnership to give their side a solid platform. KKR skipper was dismissed by Trent Boult in the 13th over of the innings after he had scored 34 runs.

Rinku Singh later joined hands with set batter Nitish Rana to hammer RR bowlers all around the ground. With 31 runs needed in 18 balls both the batter batted brilliantly and stuck a much-needed 34 run partnership till the 17th over.

Towards the end of the innings, Kolkata had put on 130 runs and needed 19 runs in two overs.

They chased down the target in 19.1 overs as Nitish Rana and Rinku Singh remained unbeaten on 48 and 42 respectively to record a fabulous seven-wicket win against Rajasthan Royals.

Earlier, Put to bat first, Rajasthan started off on a bad note as they lost the wicket of their opener Devdutt Padikkal, who got caught and bowled by Umesh Yadav, with just 7 runs on the board in the third over. Skipper Sanju Samson joined opener Jos Buttler at the crease and the duo anchored the innings.

They slowly took their side across the 50-run mark in 8 overs and kept the scoreboard moving. Their duo finally broke after Tim Southee dismissed Buttler in the 9th over, leaving the team's total at 55/2. Karun Nair came to the crease with Samson and provided his side with some momentum.

Anukul Roy then struck and sent Nair to the dugout in the 14th over of the innings, with 90 runs on the board. It was followed by Riyan Parag, who came and smashed two sixes and a four to keep Rajasthan in the game. But his journey was also short-lived as he also fell prey to Southee's spell and got caught by Anukul Roy in the 17th over.

Rajasthan faced another blow when Shivam Mavi dismissed Samson, who got caught by Rinku Singh in the 18th over, leaving the team's total at 115/5. Then Shimron Hetmyer and Ravichandran Ashwin came to the crease and completely changed the phase of the game.