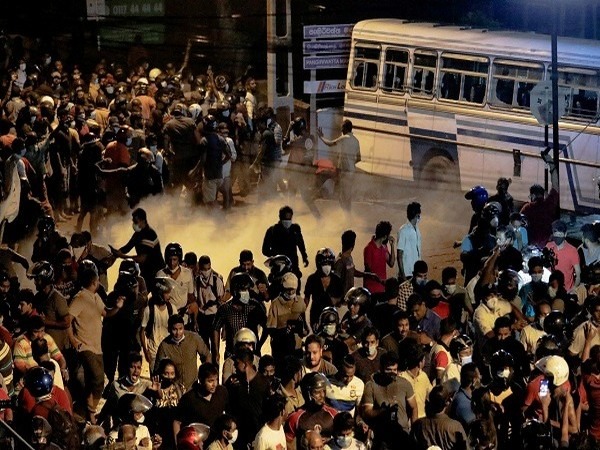 Colombo: A tense situation erupted in Sri Lanka's Galle Face protest site after the riot police were deployed on the ground, resulting in protesters engaging in a verbal battle and eventually asking the riot police to leave the site.

Video footage showing the riot police, carrying the batons was deployed in the area which led to a heated argument with the protesters and the police eventually having to leave, Daily Mirror reported.

Upon this incident, Sri Lanka's senior police officer said that the additional security has been deployed as the protesters were trying to set up a stage at the entrance of the presidential secretariat, which would block the vehicles from going in and out of the premises.

The senior police officer further said that they have urged the protesters to avoid doing this and the riot police were deployed as a precautionary measure, reported Daily Mirror.

"As long as the protests are peaceful, we will not interfere. But they cannot block the entrance of any premises," a senior police official said.

The protestors had informed the police that they were peacefully protesting for days and they should leave the premises without causing any hindrance and eventually the riot police left the site.

Mass protests over economic mismanagement escalated in early April, prompting the president to declare a state of emergency on April 1.

Sri Lanka has been gripped by an economic crisis considered the worst since the country gained independence in 1948. Due to energy shortages, some parts of Sri Lanka have rolling blackouts. Sri Lanka's foreign debt is estimated at USD 51 billion.