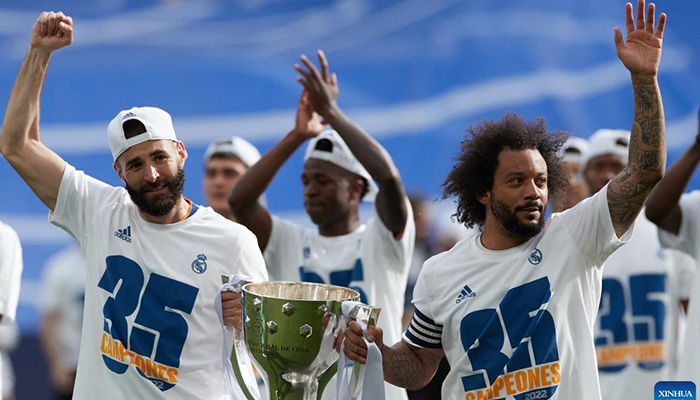 MADRID: Real Madrid sealed its 35th La Liga title thanks to a 4-0 win over Espanyol on Saturday afternoon.

Two first half goals from Rodrygo and further strikes from Marco Asensio and Karim Benzema saw Carlo Ancelotti's men to an easy win against a rival that looked like an uninvited guest at the celebrations.

Sevilla's hopes of finishing second suffered a setback when they were held 1-1 at home to struggling Cadiz on Friday night.

Youssef En-Neysri's first half header for just his fourth league goal of the season, put Sevilla ahead, but a dogged Cadiz got their reward in the second half thanks to Lucas Perez's excellent free kick.

Atletico Madrid's fourth place also looks in doubt as they were beaten 2-0 away to Athletic Club Bilbao, who keep their hopes of playing in Europe next season alive with an impressive win.

Inaki Williams' eighth minute cross was deflected into his own net by Atletico defender Mario Hermoso as Athletic dominated the first 25 minutes.

Atletico began the second half brightly, but after Antoine Griezmann had rattled the crossbar with a free kick, Williams netted Athletic's second from the penalty spot after Iker Muniain had been fouled.

Although Angel Correa saw a deflected shot rebound off the post in injury time, Atletico never looked like recovering from the second goal.

The result leaves Athletic a point behind seventh place Villarreal, who suffered a hangover from their Champions League semi-final against Liverpool with a 2-1 defeat away to Alaves.

First half goals from Victor Laguardia and Gonzalo Escalante gave Alaves a 2-goal cushion and the side from Vitoria held on to climb above Levante after Samuel Chukwueze pulled a goal back for Villarreal two minutes into the second half.

Oscar Duarte scored an 81st minute equalizer for Levante to cancel out Hugo Duro's first half opening goal for Valencia in the city derby.

Levante slipped back to bottom of the table after missing chances to win the game after Valencia defender Jose Luis Gaya was sent off for a direct red card after 31 minutes.

Levante made 24 shots in the game but collected only one goal from Duarte on 81 minutes. Duro caught the only chance on target for Valencia in the 27th minute.