No payment problems for Russian tourists in Turkey 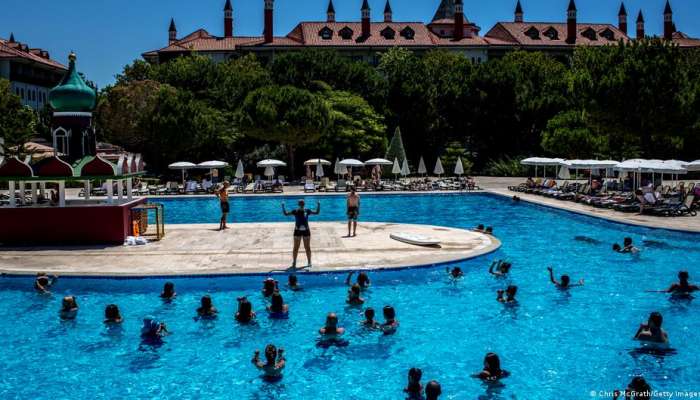 Istanbul: Turkey wants to boost its tourism revenue to prepandemic levels this year and revive a crisis-hit economy after a currency crash wiped half the value of the lira.

That's easier said than done, because Turkey relies heavily on Russian energy, trade and tourism. In 2019, trade volume between the two countries reached $26.3 billion (€25.07 billion), while Russia is also one of the leading energy suppliers for Turkey.

NATO member Turkey opposes Western sanctions on Russia on principle and has not joined them. It wants to maintain good relations with both Russia and Ukraine amid a deepening economic crisis at home with inflation hitting a 20-year high via rising energy and grain costs.

That's why tourism revenues are seen as vital to reducing the gaping current account deficit, but restrictions on card payments and flight operations due to the sanctions have triggered fears of a slump in Russian tourism to Turkey. However, Turkey might have found a solution.

Russians can pay with Mir cards
US card giants Mastercard and Visa have suspended their Russian operations as part of the US sanctions meant to punish President Vladimir Putin. But Turkey has a formula to allow Russian tourists to travel to Turkey, bypassing the suspension of Visa and Mastercard: Russians in Turkey are able access to their funds through Russia's homegrown payments system Mir.

Russia created Mir (Russian for "peace" or "world") in 2014 over fears that Western sanctions against Russian banks and business people over the annexation of Crimea could block transactions made with Mastercard and Visa. Mir was later introduced to some foreign countries where Russians travel and live.

The Mir cards, used for bank transfers, are accepted throughout the Russian Federation and in 12 other countries, including Armenia, Kyrgystan, Kazakhstan, Belarus, Vietnam and Cyprus, according to the Bank of Russia. As of the end of 2021, the number of issued Mir cards totaled 113.6 million.

Turkish Treasury and Finance Minister Nureddin Nebati said that the Mir card usage rate in Turkey is currently at around 15%. Banks are working to increase it, ignoring Ukrainian central bank's call to countries including Turkey last month to suspend all transactions with cards of Russia's Mir payments system.

Turkey's attempts could be interpreted as circumventing sanctions against Russia, some experts warn.

However, she warns that Turkey must be careful with its approach.

"If there are efforts to buy energy from Russia and sell it to the West, then Turkey's stance will go from right to wrong. Considering that we are a country where the potential of such initiatives is high, if we start to hear about oil products being bought and processed here, and sold to the West, it could be a problem, if it becomes a tool for Russia to evade the Western embargo." The US prosecution of Turkish state lender Halkbank, which is accused of having helped Iran evade US sanctions, is a case in point, said Atabay.

The Turkish government was hoping for a post-COVID-19 rebound this year, targeting prepandemic tourism revenues of $35 billion.

However, Turkey will not be able to reach this goal, according to Atabay. She says Russia's economy is expected to contract by 10% this year.  "Their currency has lost value, inflation has risen. Therefore, the purchasing power of Russian tourists and Russian people has decreased. Some Russian citizens will also give up on vacation," she said.

Some 4.7 million Russian tourists, out of a total of 24.7 million foreign tourists, visited Turkey last year, accounting for 19% of the total tourist arrivals, followed by Germany with 12.5% and Ukraine with 8.3%, according to figures from the Ministry of Tourism.