This good-hearted Omani is planning third aid trip to Yemen 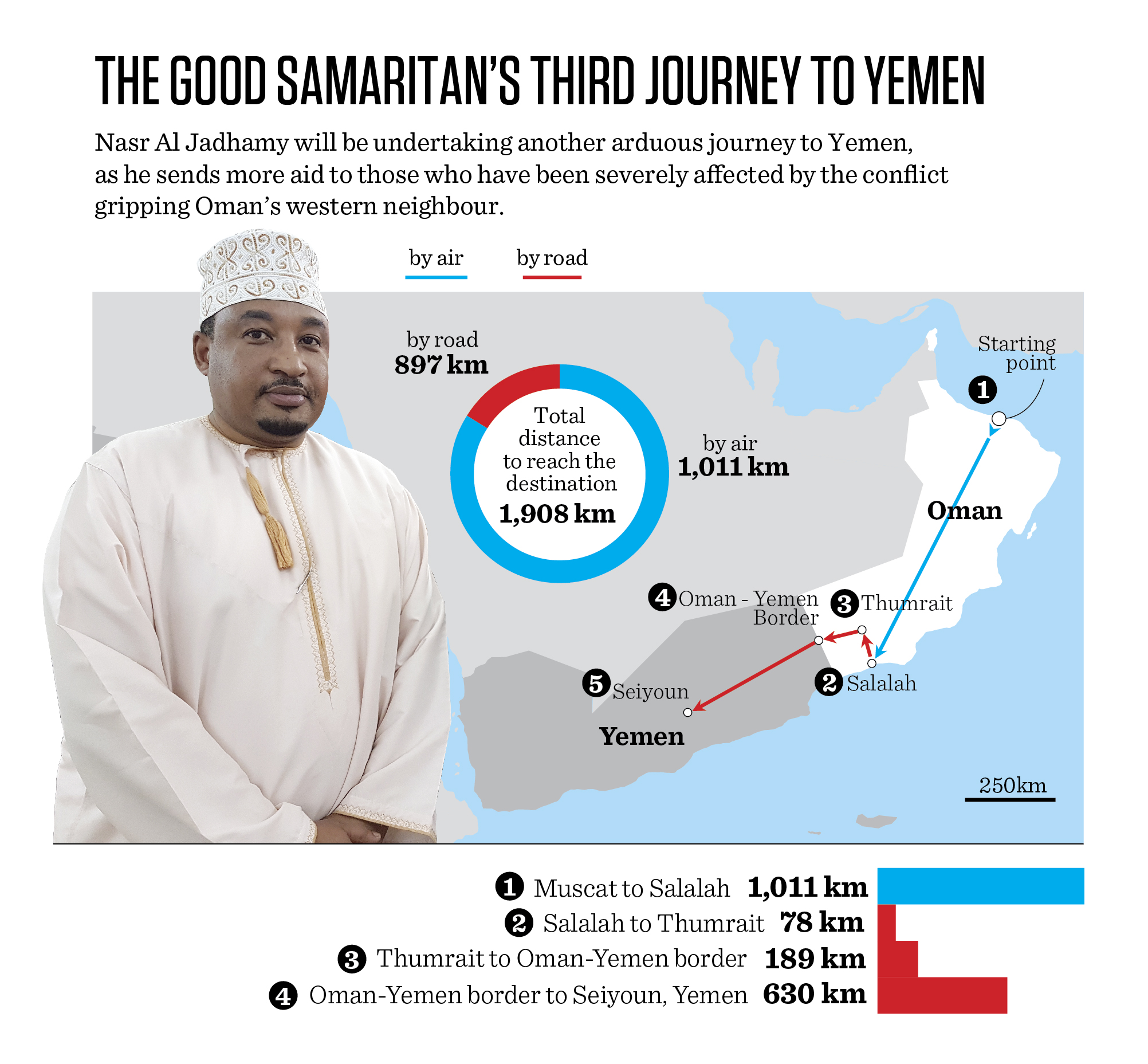 Muscat: This Eid, while most of us have planned to spend a few days relaxing with family and friends, Nasr Al Jadhamy will be undertaking another arduous journey to Yemen, as he sends more aid to those who have been severely affected by the conflict gripping Oman’s western neighbour.
Having just returned from helping underprivileged families in Africa, Al Jadhamy will soon be embarking on his third aid trip to Yemen, with the 55 tonnes of relief supplies packed into three trucks, which will make the dangerous journey by road, from Muscat to the town of Seiyoun in the Hadhramawt Governorate of Yemen, via Thumrait and Salalah.
This time round, though, his endeavours have received the support of Mohammed Al Barwani, the founder, owner and chairman of Omani company MB Holding, which operates in the oil and gas, oilfield services, engineering and mining sectors.
“We want to depart before Eid, god willing,” said Al Jadhamy, speaking to the Times of Oman. “We have received donations from many people of different nationalities, and we have also received sponsorship from Mohammed Al Barwani. Most of the supplies we have are about 40 tonnes of rice and a 20-foot container of wheat flour.”
“We have also been given oil, sugar, clothes, blankets, and even some room coolers for the people in Yemen,” he added. “I was expecting to only receive half of what I hoped to collect, because I’d returned from Somalia very recently. I was not in town during all of Ramadan, and I only returned to Oman on the last day of the Eid holiday.”
**media[727142]**
“This trip is taking place only two weeks after coming back from Africa, and it has taken me one and a half months to collect all of these things,” Al Jadhamy added. “People responded because they know that I will make my efforts clear to them. When I collect these items, send them, and even distribute them, I have to be there all the way. These are dangerous places to travel to, but I have taken the responsibility to take them there so I have to be there at the time.”
“This time, we also want to go to the places that are hard to approach, but I have not received the support from the other side, because some of these areas are very badly affected by the war,” said Al Jadhamy. “This is why we have to maintain good relations with the people there, so that we know how to cross these dangerous areas.”
Al Jadhamy’s trucks will make their way to the Yemeni border, via Thumrait and Salalah. While the trucks will make the journey by road, he will fly to the Dhofar Governorate, and then drive to the border. Once the trucks have been cleared, he will head back to Salalah, fly back to Muscat and then attempt to fly to the airbase in Seiyoun, via Egypt. Although this might seem arduous, Al Jadhamy was provided a signed and stamped letter by the local authorities in Hadhramawt, that would make it far easier for him to cross the border: his first journey saw him wait at the border for nine days before Yemeni authorities in Sana’a, whose communications were poor because of the conflict, gave him permission to enter the country.
“I believe that as long as God has given me the will to do something, he will also give me the hands to carry this out,” he revealed.
“I know that these things cost a lot of money, but these are for my fellow human beings, and by the grace of God, I am able to continue my efforts so far. My family asks me not to go, because it is dangerous, but we will not be here forever, and we will be remembered for the way we lived our life.”
“The people in Oman have trusted me for almost nine years, and I want to thank them for assisting me, trusting me and supporting me,” said Al Jadhamy. “But I am only one person, so we should have more teams of people doing this, because the population of Yemen is about 27 million people. If other people also do this, they can go to other areas because Yemen is a big country and there are many places that need our help.”