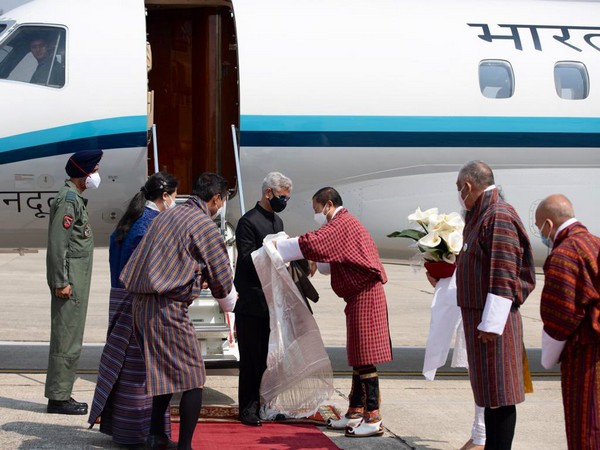 Thimphu: External Affair Minister S Jaishankar arrived in Bhutan on an official visit on Friday and said he was looking forward to a productive trip and enhancing bilateral cooperation between India and Bhutan.

"Delighted to be back in Bhutan. Good to see @FMBhutan Tandi Dorji. Look forward to a productive visit," Jaishankar tweeted.' He also shared photographs of his arrival here.

Jaishankar is in Bhutan at the invitation of his Bhutanese counterpart Lyonpo Tandi Dorji, as per an official statement by India's external affairs ministry (MEA).

Jaishankar will be Bhutan's first high-level visitor from abroad since March 2020. During the visit, the two sides will discuss all issues of mutual interest, including the upcoming high-level exchanges, economic development and hydro-power cooperation.
On Thursday, Jaishankar arrived in Dhaka, kicking off his three-day visit to Bangladesh and Bhutan from April 28-30. Notably, this is Jaishankar's first visit to Bangladesh, since March 2021.

In Dhaka, Jaishankar called on Bangladesh Prime Minister Sheikh Hasina during his official visit to the country and also conveyed Prime Minister Narendra Modi's invitation to her to visit India later this year.

EAM Jaishankar also exchanged views with the Bangladesh PM on bilateral, regional, and international issues of mutual interest.
"This afternoon, EAM called on Prime Minister of Bangladesh, H.E. Sheikh Hasina and conveyed Prime Minister Shri Narendra Modi's invitation to her to visit India at her convenience later this year," an official statement said.

Jaishankar also met his counterpart, Foreign Minister of Bangladesh, AK Abdul Momen and extended him an invitation to attend the next meeting of the Joint Consultative Commission to be held in India prior to the visit of PM Hasina.