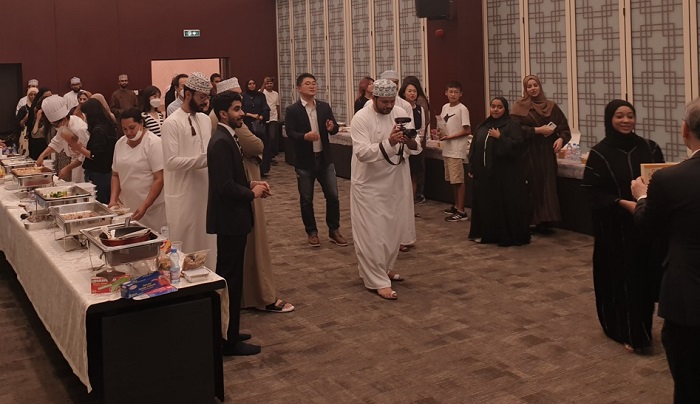 Muscat: The warm and affectionate sense of “Sharing and Caring” filled the hall of the Korean Embassy at an Iftar dinner that the Embassy co-organised with the “OK Nuri” on April 27. The “OK Nuri” stands for Oman-Korea Nuri (نور ,an Arabic word for light) and is a voluntary group of Omani fans of Korean culture. The OK Nuri has about 300 plus members, whose interests cover Korean music, drama and films and beyond.

Consul Mr. Koo Bonil of the Korean Embassy said that the Embassy invited OK Nuri members at this special Iftar dinner in honor of the spirit of solidarity and benevolence of the holy month of Ramadan. “Sharing and Caring” is the theme of the dinner that captures the sentiment of the Korean and Omani participants at this dinner. The Omani fans shared Omani shuwa with their Korean friends, and the Korean participants offered Korean food, most notably Kimchi, Bulgogi (marinated beef barbecue), Japchae (crystal noodle) and Tteokbokki (rice cake in chili sauce) to their Omani brothers and sisters. OK Nuri Club leader Khlood Al Hajri said “To spice up the evening, a competition was organized for the best homemade cooked dishes, encouraging all participants to showcase their talent and skills and also a chance to win some attractive prizes.”

The Omani and Korean participants at the Iftar dinner agreed that they came to better understand the mutual cultural features of Oman and Korea by sharing food especially in the context of compassion of Ramadan. They also acknowledged that people-to-people exchanges including the activities of the “OK Nuri” would contribute to the promotion of partnership between Oman and Korea.