IPL 2022: Saha, Tewatia and Rashid shine as GT beat SRH in another thriller of season 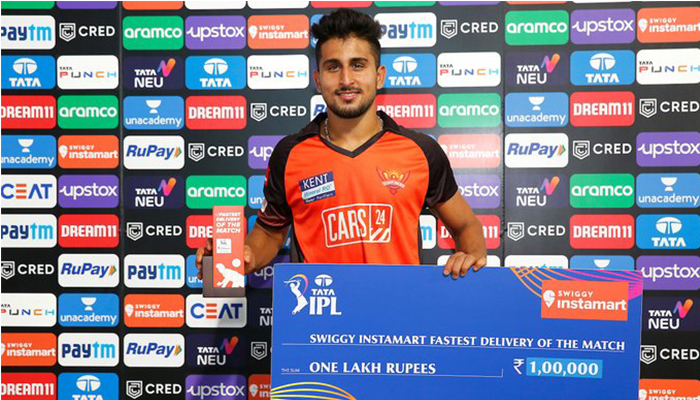 Mumbai : Half-century by Wriddhiman Saha and fiery cameos by Rahul Tewatia and Rashid Khan, guided Gujarat Titans to a thrilling five-wicket victory over Sunrisers Hyderabad at the Wankhede Stadium here on Wednesday. The high-scoring match was settled in the last ball of the last over.

Rashid and Tewatia smashed 31 runs and 40 runs respectively to completely outshine the five-wicket haul of Hyderabad's Umran Malik. Chasing 196, Gujarat started at a great pace as the openers Saha and Shubman Gill built a 50-run partnership in just 6 overs. Hyderabad then got a breakthrough after Umran Malik dismissed Gill in the 8th over and Gujarat were 69/1.

Saha was joined by Hardik Pandya and the duo tried to anchor the innings for some time but it was Umran Malik again who sent the GT skipper back to the dugout in the 10th over of the innings with only 10 runs in his kitty.

David Miller joined Saha at the crease and the duo made up for the lost momentum. Saha thrashed Hyderabad bowlers to every corner of the ground to bring his half-century in 28 balls. But it was Umran Malik, who had the last laugh as he bowled Saha out for 68 runs, in the 14th over and left Gujarat at 122/3.

Umran Malik struck again and took back-to-back wickets of David Miller and Abhinav Manohar in the 16th over with Gujarat now struggling at 140/5. Rahul Tewatia and Rashid Khan then joined hands at the crease and brought some hope back for their side.

The duo started smashing the Hyderabad bowlers and brought the momentum back to their side. With 22 runs left of the last over, Tewatia smashed the first ball of Marco Jansen out of the stands for a six. It was followed by a single which brought Rashid Khan to the crease.

Rashid followed the footsteps of Tewatia and he smashed the third delivery for a six. With nine runs required off 2 balls, Rashid hit two back-to-back sixes and took Gujarat to victory.

Earlier, the fifties from opener Abhishek Sharma and Aiden Markram powered Sunrisers Hyderabad to 195/6 in the first innings. For Gujarat, Mohammed Shami took three wickets while Yash Dayal and Alzarri Joseph settled for one.