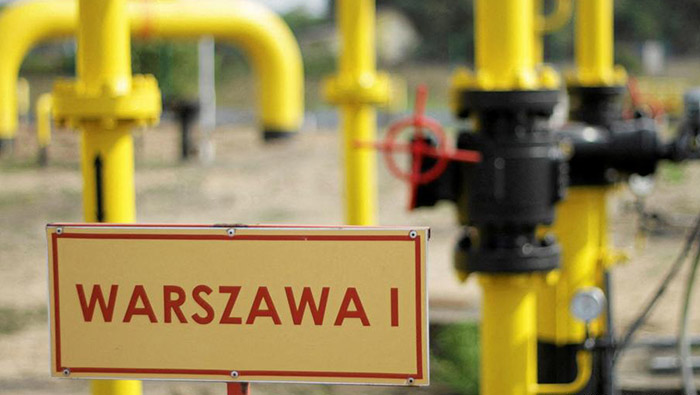 Moscow: Russian energy giant Gazprom on Wednesday halted gas supplies to Bulgaria and Poland for failing to pay for gas deliveries in rubles. This is clearly the Kremlin's toughest response yet to several rounds of sanctions imposed by the West for the invasion of Ukraine.

Poland and Bulgaria are the first countries to have their gas cut off by Europe's main supplier since the start of Russia's war in Ukraine on February 24.

Poland’s government said it was told by its Russian supplier, Gazprom, on April 26 that the country’s gas supply from Russia would be halted from April 27.

Russia is clearly flexing its muscles after Warsaw unveiled sanctions on 50 entities and individuals including Gazprom, Russia’s largest gas company, which supplies 55% of Poland’s annual consumption of 21 billion cubic meters (bcm) of gas a year.

The move also followed Warsaw’s refusal to pay Gazprom in rubles. Russian President Vladimir Putin, said at the end of March that Gazprom's foreign contractors from "hostile countries" must only pay for Russian gas in rubles.

Most EU countries, including Poland, Bulgaria and Germany, did not agree to do so. The only EU leader who had suggested he would pay Gazprom in rubles is Hungary's Viktor Orban.

Moscow's move thus highlights the different strategies adopted in Poland and Hungary to deal with their historical overreliance on Russian energy sources.

Russia's attack on Ukraine has pushed the EU to show how much it is willing to reduce its dependence on fossil fuels from Russia, which supplies 40% of the bloc’s gas, 27% of its oil imports and 46% of its coal imports.

But a radical shift would impact some countries far more than others. Two cases in Central and Eastern Europe — Poland and Hungary — stand out, the former for its already started decoupling from Russian sources of energy and the latter for its plans to reinforce energy ties with Russia.

"The energy security decisions that Warsaw and Budapest have made in the past several years are strikingly divergent," Benjamin L. Schmitt, research associate at Harvard University and a senior fellow at the Center for European Policy Analysis, told DW.

Hungarian Prime Minister Viktor Orban has not vetoed EU sanctions against Moscow, but has also indicatively  not criticized President Vladimir Putin directly. Poland’s ruling Law and Justice (PiS), meanwhile, has been leading calls for a tougher EU line on Russia and has long been making plans to decouple itself from Russian energy sources. Orban rejects curbs on oil and gas imports from Russia, saying they would damage Hungary’s economy. He won the recent election in part on a promise to preserve gas supply security for Hungarian households.

This includes its support for the second line of the Kremlin-backed TurkStream pipeline, as well as signing a 15-year gas supply contract with Gazprom late last year.

"Like Ukraine, Poland has also viewed Russian natural gas dependency as a strategic threat even more than an economic one associated with earning transit fees," said Schmitt.

Poland is the seventh-largest gas consumer in the EU, using around 17 bcm of gas a year (about 20-25%  of Germany's consumption). It imported over half of that from Gazprom.

Russia provides around 55% of Polish gas imports, 66% of oil imports and 75% of imported coal, according to think tank Forum Energii.

"Warsaw's approach matches its full-throated support for Ukrainian sovereignty and actions to put pressure on the Putin regime for its criminal war of aggression against Ukraine. Foremost among these actions, Warsaw has declared that it will end all imports of Russian oil, gas, and coal by year's end," said Schmitt.

"It is historic in that it is the first direct pipeline gas that will reach the Central and Eastern European market from the North Sea, offering true diversification for the region," Schmitt noted.

Poland can buy gas on the European spot market and get deliveries via pipelines to Germany and the Czech Republic. On 1 May, a new gas pipeline connection with Lithuania is due to open that will give Poland access to gas from Lithuania's LNG terminal.

Meanwhile, Warsaw is also looking to the US. A deal signed by the Polish state-owned oil and gas company PGNiG with two subsidiaries of US-based Venture Global LNG will supply Poland with up to 2.7 bcm of natural gas.

Shrinking the role of gas could also mean a bigger role for nuclear energy. Warsaw plans to have its first nuclear plant operating in 2033. The government expects Poland to have a total of 6-9 GW of nuclear power by 2043, which will account for around 10% of power generation.

"Unlike Hungary, Poland has been acutely aware of issues related with this dependency and has moved to diminish it and in 2023 make it possibly nonexistent with new interconnections with its neighbors to balance the regional market, including a just finished one with Lithuania that connects LNG terminals in both of these countries and establishes the first ever land gas connection with the EU for Lithuania (and the Baltics)," Anna Mikulska, an energy expert at Rice University, said.

"For Poland, the decoupling from Russian energy sources should be easier. Probably it is most problematic for Polish refineries that have been set up for Russian oil, but that is something that can be overcome, if at a higher cost," Mikulska told DW.

Hungary imports about 80% of its gas and 65% of the oil it needs from Russia, with MOL's refineries at Szazhalombatta and in Slovakia processing Russian oil.

Gergely Gulyas from the prime minister's office said recently that there was no alternative in the foreseeable future to Russian gas. "Not just the Hungarian, but also the German economy would be wrecked and slide into a deep recession without Russian gas...so any debate about this, or moralising, is pointless," he said. Gulyas said it would take several months up to a year and hundreds of billions of forints to adjust MOL's refineries to enable them to process non-Russian oil.

Hungary also wants to see the details of an EU proposal for sanctions on Russian oil and gas imports before it decides whether to block those or not.

"Hungary has also been more welcoming to Russian gas including via the new pipeline, the Turkish Stream, which could completely replace its Ukrainian transit. With the exception of recent access to relatively small amount of LNG from a floating terminal in Krk, Hungary relies on natural gas from Russia almost completely, as it does on oil imports. It also has also relies 100% on uranium for its nuclear power plants (Paks) and 80% of financing for the expansion of those nuclear plants comes from Russia," said Mikulska.

"It will be interesting to see what the country will do if in fact the EU introduces an end to oil imports or gas imports from Russia. I don't think this will be something Hungary will comply with given the country's sheer inability to get its energy from somewhere else in the immediate-term at least," said Mikulska.

"Since 1919, Hungary has been a landlocked country and thus very dependent on pipeline supplies, which cannot easily be rebuilt. It obviously does not have an LNG terminal like Poland at hand. Its major MOL Danube refinery is specialized to process Russian crude (as is the Schwedt refinery in eastern Germany)," Rothacher said.

"Thanks to nuclear power and a more recent EU push toward decarbonization, the role of coal in Hungary has steadily diminished over the past three decades and we have seen growth in renewable power. Actually, recently Hungary has announced an earlier date for coal phaseout from 2030 to 2025 - getting rid of lignite especially and including more nuclear power." Mikulska noted.

"Hungary has an energy mix built around natural gas, nuclear and oil, all of which are dependent on Russian fuel or Russian technology," Nicholas Kumleben, a senior analyst at GreenMantle, told DW. "Hungary receives relatively cheap Russian gas paying materially less than Poland and many other EU member states and political ties with Russia are closer than Poland's," Kumleben argued.

What next?
"There is also the argument that an EU oil and gas embargo would not suddenly ‘stop' the war," Rothacher said. "Russian armaments and ammunition for the current war have been financed by past export earnings from oil, since gas revenues are mostly used to cross-subsidize cheaper domestic consumption of households and industry," Rothacher added.

"Rather than damaging the economies of Central and Eastern European countries more than the Russian one, we should in my view pay our bills into an escrow account, from which later also Russian reparations could be paid for," he emphasized.

"This would have two advantages: It would restrain the Russian troops' tendency for wanton and senseless mass destructions of civilian targets, industry and infrastructure in Ukraine, and second, reduce the ability of Putin or more likely of his successors to quickly rearm for new imperialistic adventures," Rothacher concluded.