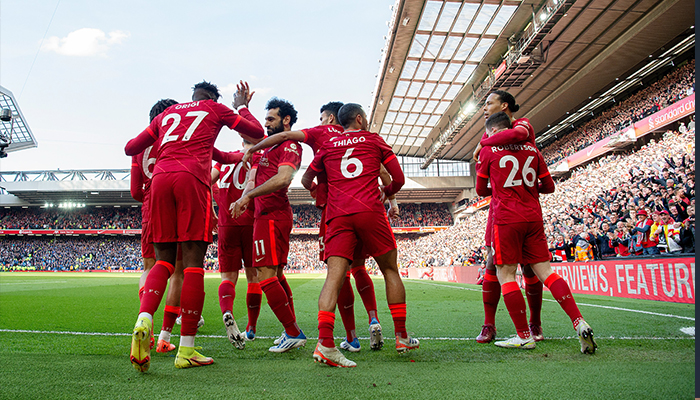 Liverpool are second on 79 points

Liverpool : Andy Robertson and Divock Origi headed Liverpool to within one point of leaders Manchester City as their second-half goals compounded Everton's relegation worries in the Premier League on Sunday.

Liverpool had 86 per cent possession, but Everton's resolute defending frustrated the Reds as they failed to record a shot on target in the opening half at Anfield for only the second time this season. The home team introduced Origi and Luis Diaz on 61 minutes and just 60 seconds later Origi's one-two with Mohamed Salah set up Robertson to head home. It was the defender's first Premier League goal at Anfield since September 2020.

Origi made the points safe with Liverpool's second goal five minutes from time, producing his sixth goal against Everton in all competitions with a header from Diaz's delivery.

Liverpool are second on 79 points, while Everton, without a single PL away point in 2022, lie third from the bottom on 29, two points behind 17th-placed Burnley with a match in hand over the Clarets.

Earlier at Stamford Bridge, Christian Pulisic scored in the 90th minute to give Chelsea a 1-0 win over 10-man West Ham United.

Lukasz Fabianski thought he had earned West Ham a point after he had saved Jorginho's 87th-minute penalty awarded for a foul on Romelu Lukaku by Craig Dawson, who received a straight red card for the denial of a clear and obvious goalscoring opportunity.

But substitute Pulisic met Marcos Alonso's low cross and found the bottom corner with Chelsea's 24th shot of the match and spare his side what would have been a third consecutive home match without a win.
It takes Chelsea on to 65 points, five more than fourth-placed Arsenal and with a match in hand.