India carving out opportunities from challenges amid Ukraine crisis 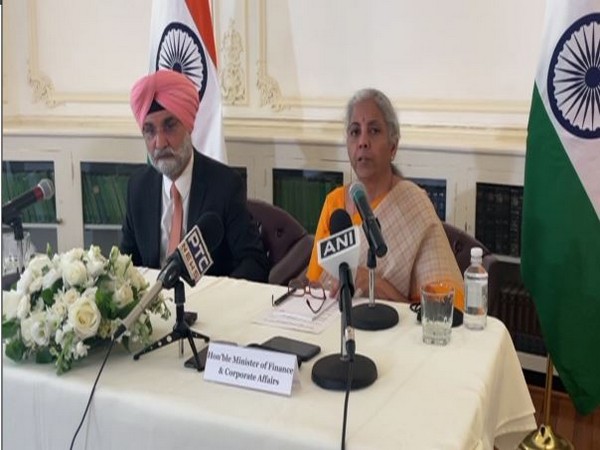 Washington: Finance Minister Nirmala Sitharaman on Friday said that India is "carving out" opportunities from challenging situations as the world continues to face hikes in fuel prices and shortage of food grains amid the Russia-Ukraine war.

Addressing a press conference in Washington alongside Indian envoy to US Taranjit Singh Sandhu, Sitharaman said that India is trying to find a market for its exports and provide meaningful assistance to end hunger. The Finance Minister said she voiced her concern that countries like India which have potential for floating its agricultural produce, particularly cereals, have faced difficulties with the World Trade Organisation (WTO).

"...I have voiced that countries like India which has potential for floating its agricultural produce, particularly cereals, have faced difficulties with the WTO. And because of that the entire plenary was recognizing that there is hunger and shortage of food grains all over the world -- countries like India which can promptly supply are facing difficulties with WTO," she said.

Answering a question on economic challenges posed by the Russia-Ukraine war, she said, "Yes, in some aspects, the war has brought challenges for us. The supply of sunflowers, which was largely from Ukraine, is not happening now. So, we are trying to search for alternative sources."

On the impact of war on India's energy needs, Sitharaman said the portion of crude coming from Russia is not more than 3-4 percent. "So in an energy basket which is largely from the Middle East and somewhat from the US, that portion which comes from the Russian federation is not so much that it is going to upset us."

"Of course the war is causing metals to go up, agriculture products to go up and also disruption in supply chains, all that pain is equally borne by India also. The opportunities that we have identified and progressed in it are export of foodgrain including wheat," she said.
Sitharaman also answered a question asked by ANI on possible India-US cooperation on energy front. "If there is any cooperation that they want to extend (on energy) then they are welcome. But I have not had any discussion per say in the bilaterals on energy related assistance," said Sitharaman.

She made the remark in response to earlier remarks of US Deputy National Security Advisor Daleep Singh, who during his India visit, had proposed greater India-US cooperation on the energy front.

Further, Sitharaman said India's achievement in terms of the digitisation that has taken place in the recent past is being recognised.
"Many of them are even coming forward to know more and share any such experience," she added.