Thousands protest US bases on Okinawa after Japan woman's murder 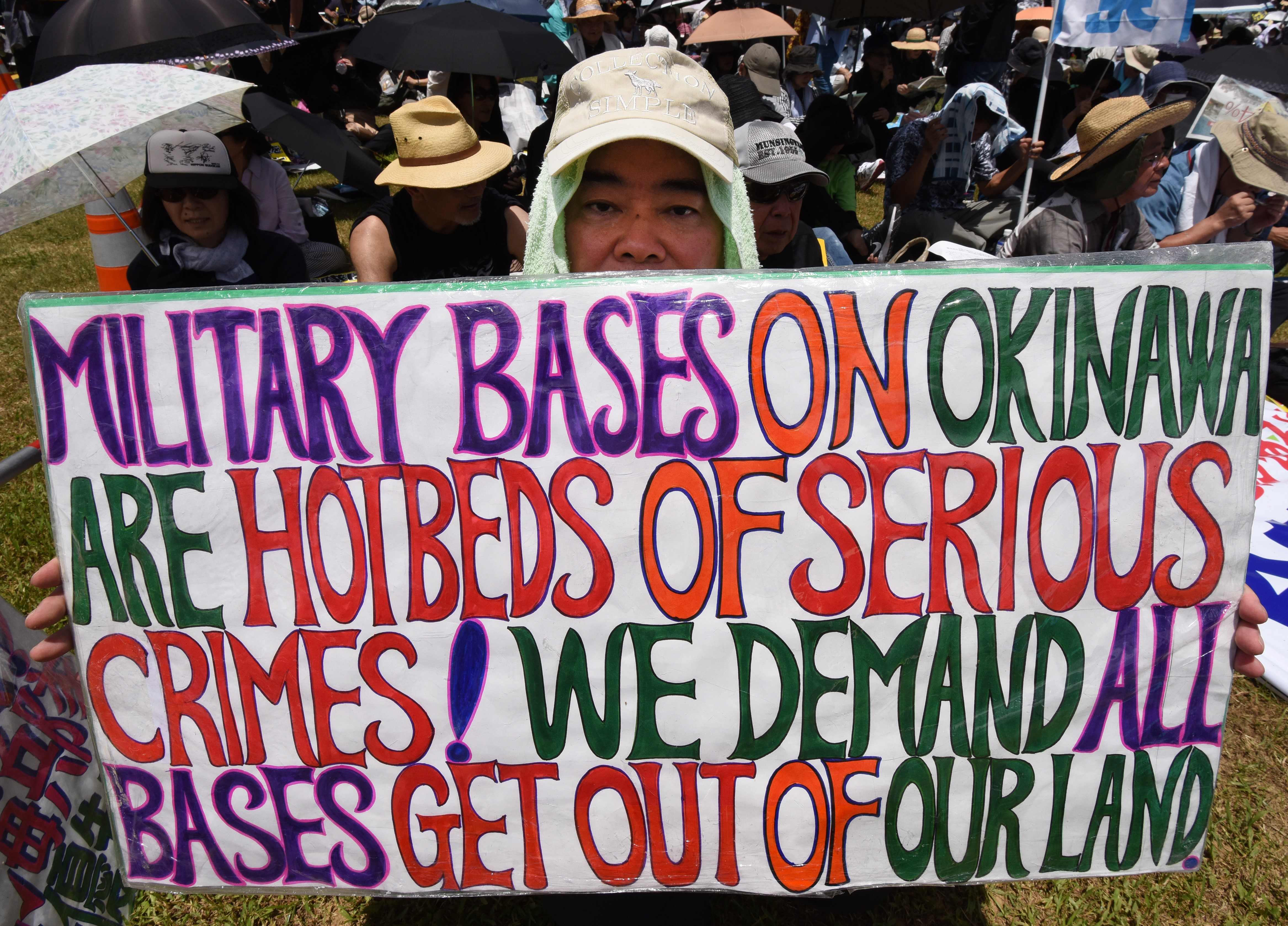 Naha(Japan): Tens of thousands of people gathered in sweltering heat on Japan's Okinawa island on Sunday in one of the biggest demonstrations in two decades against US military bases, following the arrest of an American suspected of murdering a local woman.
The protest marked a new low for the United States and Japanese Prime Minister Shinzo Abe in their relations with the island and threatens plans to move the US Marines Futenma air station to a less populous part of the island.
Organisers said 65,000 people attended the rally at a park in central Naha. "Japan is part of Japan and when you hurt your little finger the whole body feels pain. I want Abe to feel Okinawa's pain," said Shigenori Tsuhako, 70, who came to the event because his grand daughter is the same age as the 20-year-old murdered woman, Rina Shimabukuro.
The United States and Japan agreed in 1996 to close Futenma, located in a residential area, after the rape of a 12-year-old Japanese schoolgirl by three US military personnel spurred mass demonstrations.
That plan has been on hold because residents near the proposed relocation site oppose the move, worrying about noise, pollution and crime.
Okinawa assembly members against the move won a majority in the prefectural assembly election this month, providing support for Okinawa Governor Takeshi Onaga's plan to have the base move elsewhere.
Speaking to the crowd in Naha, he said he would fight to have those US Marines moved off the island. Okinawa hosts 50,000 US nationals, including 30,000 military personnel and civilian contractors. The site of some of the bloodiest fighting between the US and Japan in World War Two, Okinawa remained under American occupation until 1972 and around a fifth of it is still under US military control.
Lieutenant General Lawrence D. Nicholson, commander of the US.Marines there, told Reuters on Saturday that Washington may be able to return a 10,000 acre (40.5 square km) tract of jungle early next year, which would be the biggest hand back since 1972. Yet, with the United States and Japan looking to contain China's growing might in the East China Sea, the Okinawan island chain, stretching close to Taiwan, is becoming strategically more valuable to military planners.
Japan's Self Defence Force, which is pivoting away from defending its northern borders, is fortifying the region with radar bases and anti-ship missile batteries.
Last month's arrest of the US civilian worker prompted the U.S. military to announce a 30-day period of mourning for the victim and restrict off-base drinking in a bid to assuage local anger. But relations frayed further with the subsequent arrest of a US sailor on Okinawa on suspicion of drunk driving following a car crash.
"All US bases in Japan should close. I want Abe to listen to what the people in Okinawa are saying," said Ryoko Shimabukuro, a 28-year-old government worker at the protest.