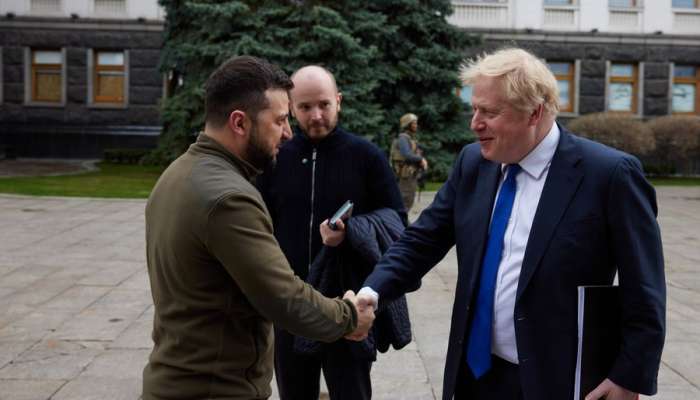 UK Prime Minister Boris Johnson has hailed his unannounced visit to Kyiv for talks with his Ukrainian counterpart Volodymyr Zelenskyy as "a show of our unwavering support for the people of Ukraine."

"We're setting out a new package of financial & military aid which is a testament of our commitment to his country's struggle against Russia’s barbaric campaign," Johnson tweeted, following the talks.

On Friday, Johnson pledged another 100 million pounds (€120 million, $130 million) in high-grade military equipment, including additional Starstreak anti-aircraft missiles, another 800 anti-tank missiles and precision munitions capable of lingering in the sky until directed to their target.

While in Kyiv, he promised to deliver 120 armored vehicles and new anti-ship missile systems.

Zelenskyy called on the West to provide more weapons to Kyiv while imposing harsher sanctions on Russia, saying they should "follow the UK's example."

The UK leader also spoke out about the discovery of hundreds of civilian bodies in Ukrainian towns near Kyiv last weekend after Russian forces left.

"What Putin has done in places like Bucha and Irpin is war crimes that have permanently polluted his reputation and the reputation of his government," Johnson said.

Ukraine's Defense Ministry later posted a video of the two leaders walking through the streets of Kyiv.


European Commission President Ursula von der Leyen said that a donor conference organized by Global Citizen, the United Nations and the Canadian government had raised €9.1 billion ($9.9 billion) for displaced Ukrainians, both internally and as refugees abroad.

On Twitter, von der Leyen wrote, "Today we raised 9.1 billion euros for the people fleeing the invasion, inside Ukraine and abroad. And more will come!"

In addition to the funds generated by the donor conference, the European Bank for Reconstruction and Development (EBRD) pledged an additional €1 billion in loans for displaced people — bringing the total amount of aid to €10.1 billion.

The event was held in the Polish capital Warsaw. Over 2.5 million Ukrainian refugees have entered Poland since Russia's invasion began in February.

Global Citizen organized around 130 celebrities, musical artists and activists to take part in a social media campaign for the conference — including stars such as Bono, Elton John, Madonna, and Celine Dion.

The event ended with a performance from Julian Lennon, the son of the late John Lennon. Julian sang his father's song "Imagine," in an appeal for peace. In a social media post, he said it was the first time he sang the song in public.