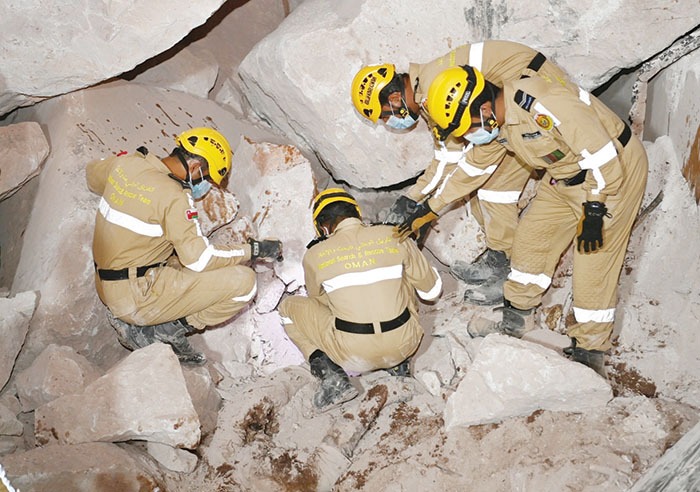 Six of the people who sadly died in the accident were found dead on arrival, while Civil Defence and Ambulance Authority (CDAA) services needed to extract another eight people from the rubble, and were pronounced dead once they had been rescued.

Muscat: Officials of the company that operated the quarry at which a rockslide killed 14 people on 27 March stayed at the site of the accident alongside emergency service personnel for the week-long duration of rescue operations.

Hussein Al Kalbani, the general manager of the International Marble Company that operated the quarry, said, “We stayed at the site of the accident from the first hours of the collapse, until the last body was pulled out from under the rubble. We didn’t go too far away from the site, because we never stopped searching for survivors under the rubble, and this required continuous efforts from all of us.

“Because there were subsequent rockslides at regular intervals, we could not work any faster to search for survivors,” he admitted. “The rocks were also very big and hard, so to break them down and transport them was very difficult. Time was running out, and with each passing minute, little by little, the hope of finding survivors was fading. The work continued with no break, and whenever we removed one of the missing people who was found dead, I felt a great sadness for them.”

Six of the people who sadly died in the accident were found dead on arrival, while Civil Defence and Ambulance Authority (CDAA) services needed to extract another eight people from the rubble, and were pronounced dead once they had been rescued. A further five were sent to hospital to recover from their injuries.

Recalling the incident, Al Kalbani said he rushed to the scene after he was informed about the rockslide. On arrival, he saw a lot of rubble and thick clouds of dust and approached one of the workers to ask if anyone at the site had been injured.

“He told me: ‘Yes, we have many who are injured and missing.’ I rushed towards the accident site to get a closer look for myself and to see if I could help them,” recalled Al Kalbani. “The view was very poor, however, because the rubble and large rocks made it very difficult to get to those who were trapped underneath.”

After making sure the injured were ferried to hospital, a distress call was made to the CDAA. Company officials stayed with emergency personnel throughout the rescue operation, and put at their disposal all of the heavy machinery and tools the company had, should rescue teams need them to extract the workers from under the rock. Because of the size and extent of the collapse, CDAA teams had set up a forward operations centre at the site to better handle and coordinate their response.

Eleven of the victims of the rock slide were from Pakistan while the other three were Indian nationals. The 14 were among the 55 employed at a marble quarry operated by the International Marble Company in the Al Aridh area in Ibri.