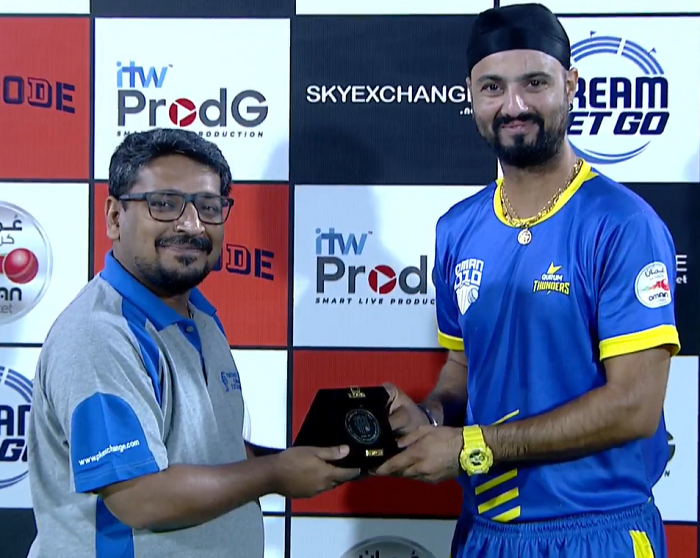 Jatinder Singh blitzed his way to a 13-ball 50 in the second phase of play - the second-fastest ever in the T10 format.

The matches will be played as part of the ICC Men’s CWC League 2. Oman currently leads that competition by 14 points, having played 10 games more than second-placed UAE.

Oman’s previous visit to the Emirates was a successful one. They won 3 of 5 games, with all of them proving profitable for multiple Omani players, one such being Bilal Khan.

He recorded career-best figures of 5/31 in the first fixture against the UAE and went on to reach and cross the 50-wicket mark for Oman in ODIs over the course of the tour.

Speaking on the milestone, he said, “All thanks to Allah. I remember it (the 50th scalp) well. It was the wicket of Stephen Baard, the Namibian batsman. I was extremely excited after picking up that wicket and am grateful to Head Coach Duleep Mendis and all the support staff including our bowling coach Avishkar Salvi who helped me a lot. We put in a lot of hard work and it was great to see it rewarded. As a fast bowler playing for your country, you always have certain goals and this 50-wicket mark was my first one. Hopefully now I can continue in the same way and pick up 100”.

Leading up to Oman’s upcoming set of matches in the UAE, Head Coach Duleep Mendis also expressed his satisfaction with his players’ recent outings in Oman Cricket’s Premier Division and D10 league.

Both of those domestic competitions witnessed historic performances from one of the country’s key players. In Match 19 of the D10 league, Jatinder Singh blitzed his way to a 13-ball 50 in the second phase of play - the second-fastest ever in the T10 format.

He went on to make 65 runs in 20 balls, a knock that included 2 fours and 8 massive sixes.

Only Chris Gayle, Muhammad Waseem and Mohammad Shahzad have bettered Jatinder’s feat in world cricket, with all of their fifties coming in 12 deliveries.

In the penultimate Premier Division match held at the Oman Cricket Academy on April 1st, allrounder Khawar Ali’s showcased his prowess with the ball to devastating effect.

He singlehandedly ripped through the opposition’s entire batting unit in the first innings, claiming 8 of 10 wickets on the way to bowling them out for a meagre 68 runs.

Khawar set his side up for a victory achieved in 5.4 second innings overs and ended proceedings with figures of 8/18.

All in all, going into these 4 games against PNG and Scotland, Oman has an individual in stunning recent form with both bat and ball.

The other players have also been operating at a top level on a consistent basis, a factor that bodes well for Oman’s quest to deliver cricket of the highest order in the UAE and consequently put one foot in the 2023 ICC ODI World Cup Qualifiers.