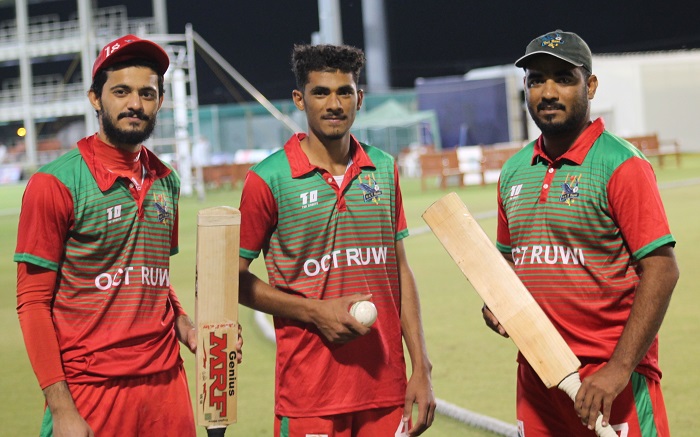 Muscat: Turf 1 of the Oman Cricket Academy played host to a thrilling encounter between OCT Al Hail ‘A’ and OCT Al Amerat in the All-Omani Tournament on April 8, 2022.

Electing to bat first in their first game of the competition, OCT Al Hail ‘A’ were bowled out for 112 in 19.2 overs. Opener Faris Said Al Zadjali top-scored for his side with a 22-ball 25. Waleed Rahim Al Balushi, Nadhir Ghulam and Abdul Ghani Al Balushi were the others with notable contributions.

In response, OCT Al Amerat lost both their openers early, but Ateel Yousuf Al Balushi and Sulaiman Haider Al Balushi steadied the innings with a 32-run partnership. Their dismissals in back-to-back deliveries of the 10th over very nearly proved terminal to their side’s hopes of progressing in the tournament.

However, Rafeeq Mohammed Siyad Al Balushi and Said Haider Al Balushi played mature knocks to keep the contest alive. Their scoring rate was slow, but the pair hung in the middle at a time when any further wickets would have served to derail the run chase completely.

With 9 runs needed off the final over, the first five balls produced 6 but Said Haider turned match-winner in the final delivery, depositing it in the stands to hand OCT Al Amerat a 5-wicket victory. Rafeeq and Said finished on individual scores of 32 and 22 respectively.

Waleed Rahim Al Balushi was the only bowler for OCT Al Hail ‘A’ with more than 1 scalp to his name.

On the other ground, OCT Ruwi clinched a much more comfortable victory against OCT Al Mabela. They came out on top by a 71-run margin.

Alongside Shuaib Ismail Al Balushi, who made 56 runs himself in the match-defining 115-run partnership, Mohammed took the game away from OCT Al Mabela in brutal fashion.

Nabeel Mohd Boota and Asif Al Balushi accounted for the two wickets that fell over the course of the first innings.

In response, OCT Al Mabela folded for 117 with 2 balls to spare. Opener Zafarullah Al Balushi led the scoring with 34 runs, with Abdullah Al Balushi, Shareef Al Balushi and Asif Al Balushi chipping in with scores of 19, 12 and 12 respectively.

OCT Ruwi were dominant with the ball too, and their star in the second phase of play was undoubtedly Zubair Ali Akabr Al Balushi. He picked up 5 wickets in his 3.4 overs to go with a 23-run first innings cameo. Khalid Pir Baksh Al Balushi, Shuaib Ismail Al Balushi, Wasim Ismail Mohamed Al Balushi and Imran Al Balushi claimed the remaining ones.