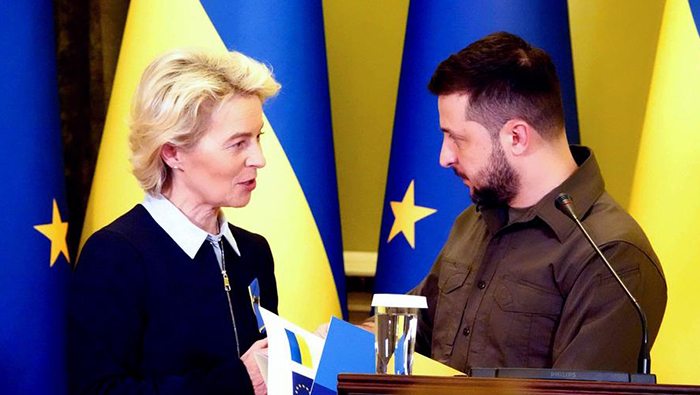 Handing over a document at a joint press conference, she said: "This is where your path towards the European Union begins."

"We stand ready to support you in filling out this questionnaire," von der Leyen said, adding: "It will not be, as usual, a matter of years, but rather a matter of weeks" to complete this step.

The questionnaire, she explained, forms the basis of an opinion that gets passed on to the European Council.

Von der Leyen said she intended to, "present Ukraine's application to the [European] Council this summer."

During the joint press conference von der Leyen said: "Russia will descend in economic, financial and technological decay while Ukraine is marching towards a European future."

On Twitter, she wrote, "It was important to start my visit in Bucha. Because in Bucha our humanity was shattered."

Among the delegation visiting Kyiv is Slovak Prime Minister Eduard Heger, who announced that his country was donating its Soviet-era S-300 air defense system to Ukraine.

EU's envoy to Ukraine returns
Borrell announced in Kyiv that the European Union was returning its delegation to the Ukrainian capital. The head of the EU delegation to Ukraine, Matti Maasikos, was accompanying Borrell and von der Leyen.

The EU representation was completely evacuated one day after the start of the war.

The envoy's return will help ensure that the European Union and the Ukrainian government can work together closely and directly, Borrell said.

"Ukraine is not a country invaded, dominated. There is still a government [which] receives people from outside, and you can travel to Kyiv," Borrell said.
EU to outline its measures to 'isolate Russia'

Borrell said one topic on the agenda of talks with Zelenskyy was possible further sanctions to "isolate Russia."

It comes as a new sanctions package, including an EU embargo on Russian coal imports, is set to be formally implemented on Friday after the bloc approved the measures.

Borrell also said the EU would supply €7.5 million ($8.2 million) to train Ukrainian prosecutors to investigate war crimes, which Russia is accused of committing in the country.

The EU's foreign policy chief added that he hoped the bloc would offer Kyiv another €500 million in the coming days.