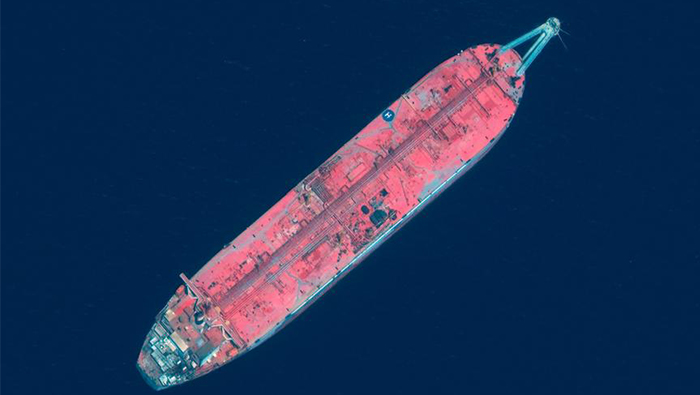 Washington: The United Nations is seeking nearly $80 million from donor nations for an emergency operation to remove a million barrels of crude oil from a tanker anchored off the coast of war-ravaged Yemen and avert a catastrophic oil spill in the Red Sea.

FSO Safer is a 45-year-old vessel that was sold to Yemen in the 1980s and has been used as a floating oil storage platform. It has 1.1 million barrels of crude oil on board.

Since 2015 the tanker has been moored off the Yemeni port city of Hodeida — held by Houthi rebels — without being serviced.

UN warns of ecological 'time bomb'
David Gressly, the UN resident and humanitarian coordinator for Yemen, said on Friday that the tanker is "a time bomb" because a major oil spill "would unleash a massive ecological and humanitarian catastrophe centered on a country already decimated by more than seven years of war.''

"Without funding over the next six weeks or so the project will not begin on time, and this time bomb will continue to tick,'' he added.

There are fears that the tanker could explode or leak causing a major environmental disaster in the Red Sea and beyond.

Following years of talks, the United Nations and Yemen's Houthi rebels signed off on a memorandum of understanding in March this year, authorizing a four-month emergency operation to tackle the immediate risk  which involves transferring oil on the Safer tanker to another vessel.

The MOU, in the long term, urges replacing the tanker with another vessel within 18 months.

Operation dependent on donor funding
A  statement from the UN on Friday said that the two-stage operation would involve the hazardous cargo being pumped from the storage platform to a temporary replacement vessel at a cost of $79.6 million.

While the second phase of the emergency operation would see a replacement platform being installed.

The UN emphasised that "the plan cannot begin without donor funding," adding that the Netherlands is set to host a donor meeting.

It said "rapid donor commitments of funds" were needed to begin work by the second half of May.