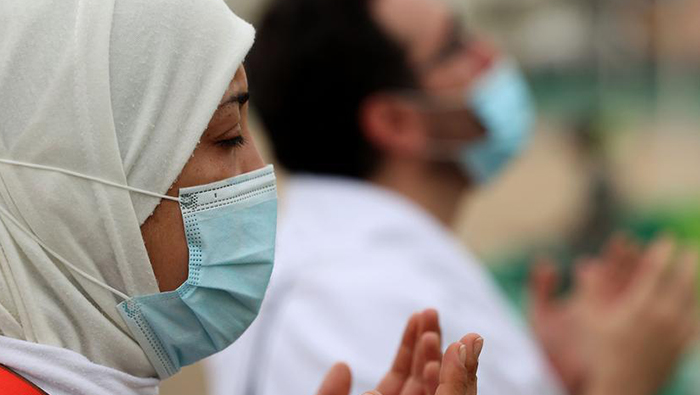 Jeddha: Saudi Arabia on Saturday announced that it will allow up to 1 million people join the haj pilgrimage this year.

The Haj Ministry "has authorised one million pilgrims, both foreign and domestic, to perform the haj this year," it said in a statement.

Saudi authorities had drastically restricted the number of people allowed to join the pilgrimage after the onset of the coronavirus pandemic.

This year's haj will take place in July. The ministry's announcement on Saturday said that the pilgrimage will be limited to fully vaccinated people under age 65.

Those coming from outside Saudi Arabia will be required to submit a negative COVID-19 PCR result from a test taken within 72 hours of travel.

The government wants to promote pilgrims' safety "while ensuring that the maximum number of Muslims worldwide can perform the haj," the statement said.

In China, the southern megacity of Guangzhou — home to over 18 million people — said it would begin COVID testing in all 11 of its districts, after coronavirus infections were reported there.

Shanghai, meanwhile, continues to grapple with the virus outbreak, with authorities reporting a record 23,600 new cases on Saturday.

The city's vice mayor admitted to shortcomings in the city's handling of the health emergency.

"We feel the same way about the problems everyone has raised and voiced," Deputy Mayor Zong Ming told a daily briefing. "A lot of our work has not been enough, and there's still a big gap from everyone's expectations. We will do our best to improve."

The city's lockdown, affecting 26 million people, showed no sign of easing as the Chinese government doubles down on its "zero-COVID" policy, which emphasizes virus elimination based on testing, tracing and quarantining all positive cases and their close contacts.

Meanwhile, the US has advised Americans against traveling to China due to the tough restrictions in place there. Washington has also authorized the "voluntary departure" of non-essential staff from its consulate in Shanghai.

The families of all US personnel are also allowed to leave, the State Department said in a statement.

The agency warned US citizens against traveling to Shanghai "due to COVID-19 related restrictions, including the risk of parents and children being separated."

In Germany, the nationwide 7-day incidence rate has dropped to its lowest level since the end of January. The Robert Koch Institute public health agency said on Saturday that the figure — which represents the number of new infections per 100,000 inhabitants over a week — was down to 1,141.8. A week ago, it stood at 1,531.5.

The country recorded 150,675 new COVID infections over the past 24 hours.

Despite the falling number of new cases, hospitals and medical staff continue to remain under enormous pressure, said the Association of Senior Hospital Physicians.

Michael Weber, the head of the association, told the Neue Osnabrücker Zeitung on Saturday that scheduled surgical procedures are having to be postponed in 60 per cent of German hospitals. He added that in 3 out of every 10 hospitals patients are being transferred to other clinics due to shortage of capacity.