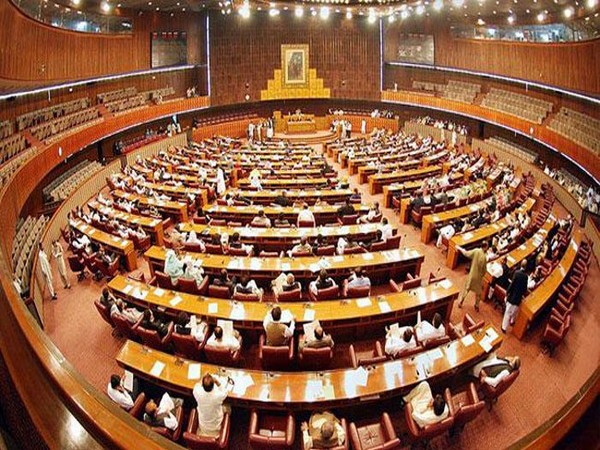 Islamabad : Amid the chaotic political play for over a week, Pakistan Prime Minister Imran Khan will finally face the no-trust vote on Saturday following the Supreme Court's order.

Imran Khan's government suffered a setback on Thursday as Pakistan Supreme Court set aside the ruling of the Deputy Speaker Qasim Suri in which he had rejected the no-confidence motion brought by the opposition.

The court set aside the dissolution of the Pakistan National Assembly and all the subsequent decisions taken. It gave directions for holding a sitting of the National Assembly "not later than 10:30 am on April 9" for the no-trust vote.

Reinstating the National Assembly, the court also declared that the Prime Minister and federal ministers, ministers of state, advisers, etc, stand restored to their respective offices as on April 3.

The top court further ruled that the National Assembly session must not be adjourned until a vote on the motion.

"The Speaker is under a duty to summon and hold a sitting of the Assembly in the present Session, and shall do so immediately and in any case not later than 10:30 a.m. on Saturday 09.04.2022, to conduct the business of the House as per the Orders of the Day that had been issued for 03.04.2022 and in terms as stated in, and required by, Article 95 of the Constitution read with Rule 37 of the Rules of Procedure and Conduct of Business in the National Assembly Rules, 2007 ("Rules")," the Supreme Court verdict said.

The Supreme Court also said that if Imran Khan is removed as a result of the no-confidence motion, the new leader of the House should be elected in the same session.

The opposition appeared to have the numbers for the no-confidence motion with some allies of the ruling Pakistan Tehreek-e-Insaf (PTI) deciding to part ways. Several members of PTI had also turned rebels.

The Pakistani National Assembly has a total strength of 342 members, with the majority mark being 172. The PTI led coalition was formed with the support of 179 members, with Imran Khan's PTI having 155 members, and four major allies MQM-P, Pakistan Muslim League-Quaid (PML-Q), Balochistan Awami Party (BAP) and Grand Democratic Alliance (GDA) having seven, five, five and three members respectively.

The opposition party had moved the no-trust motion against the PM on March 8. Imran Khan received a massive blow when the PTI "lost the majority" in the National Assembly after losing its key ally in the coalition Muttahida Qaumi Movement Pakistan (MQM-P). The MQM announced that it had struck a deal with the opposition Pakistan People's Party (PPP) and would support the no-trust vote in the 342-member National Assembly.