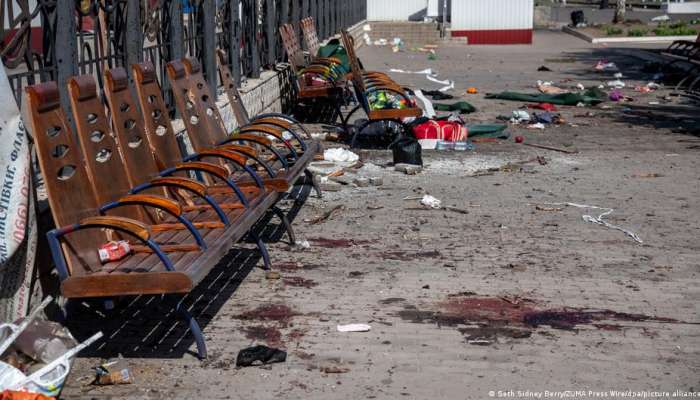 Kyrylenko said 12 people were killed instantly at the scene while an additional 40 people later died of injuries in the hospital.

Among the dead were five children.

Civilians had gathered in the hopes of being moved to safer parts of the country when the station came under attack. Photographs and videos taken just after the blast showed the dead on the ground, many with limbs missing and in one case, a head severed.

The remnants of the Russian rocket revealed "for the children" had been written on the side.

Zelenskyy wrote, "Lacking the strength and courage to stand up to us on the battlefield, [the Russians] are cynically destroying the civilian population."

He added, "If it is not punished, it will never stop."

After the attack, Kramatorsk's mayor, Oleksandr Honcharenko, said authorities continued to work on resuming the evacuation of residents by buses and cars. During an online briefing, Honcharenko called for assistance with the effort.

"Today we are starting an emergency evacuation of people with all public transport, all private transport. We are looking for drivers. Approximate 30-40 drivers are needed as of today," he said.

Honcharenko added about 4,000 people were at the station when the attack occurred. With dozens of surgeons working to treat the injured, the hospital nearby was struggling to cope.

Honcharenko said, "There are many people in a serious condition, without arms or legs."