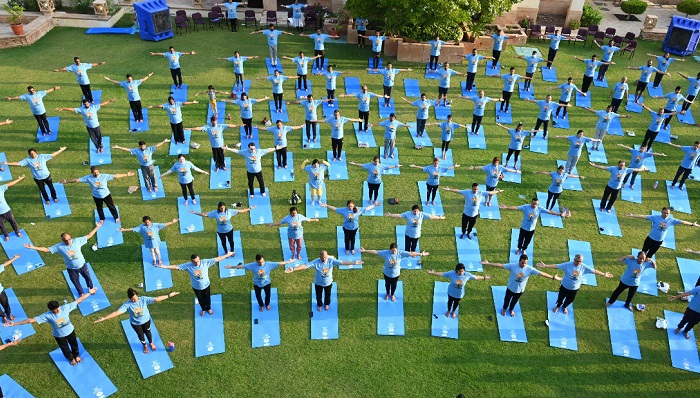 Muscat: Yoga symbolizes a journey for universal health and well-being. Attesting to the global appeal of Yoga, the United Nations declared 21 June as the ‘International Day of Yoga’ in 2014. The International Day of Yoga (IDY) has over the years morphed into a global movement for holistic health and well-being and is celebrated all over the world every year on 21 June with great enthusiasm.

Yoga is quite popular in Oman also and over the years increasing number of Yoga enthusiasts from different nationalities have participated in IDY. This year as we celebrate 75 glorious years of India’s independence, the Embassy with support of various Yoga organisations in Oman, plans to organise 75 events in the coming 75 days in the run-up to the celebration of 8th IDY. The events will be organized under the theme of ‘Muscat Yog Mahotsav 2022 – 75 Days, 75 Events’, that will continue till 21 June. This Yoga festival will include events in both online and offline modes at different locations in Muscat and also in many cities of Oman such as Salalah, Sohar, Sur, etc.

The ‘Muscat Yog Mahotsav’ was launched with a curtain raiser event organised in the morning of 8 April at the Embassy premises. It was attended by Indian Social Club representatives and members of several Yoga organisations in Oman. The event started with a ceremonial lamp lighting by Madam Divya Narang. Ambassador Amit Narang briefly addressed the gathering and stated that Yoga connects us to our inner self and acts as a catalyst for overall health. A Tanjore painting made by Ms. Kavitha Ramakrishna depicting one of the most powerful and versatile Yoga movements – Sun Salutation was also unveiled by Ambassador to mark the formal start of Yog Mahotsav in Oman.

After the brief formal program, the Common Yoga Protocol (CYP) was performed by all the participants, which was demonstrated by Yoga experts from Sanskriti Yoga, Art of Living, Yoga Shaala, and Yoga City.

Embassy invites all Yoga enthusiasts, Indians, Omanis and friends from other countries resident in Oman to participate in this first ever Yoga festival of health and well being. The weekly schedule of events under the Yog Mahotsav will be uploaded with details on Embassy’s social media.

The main celebration of 8th IDY on 21 June 2022 is planned to be held at Oman Convention & Exhibition Centre with the support of Government of the Sultanate of Oman, Yoga organisations, Indian Social Club, Indian Schools in Oman as well as Oman based Yoga practitioners.