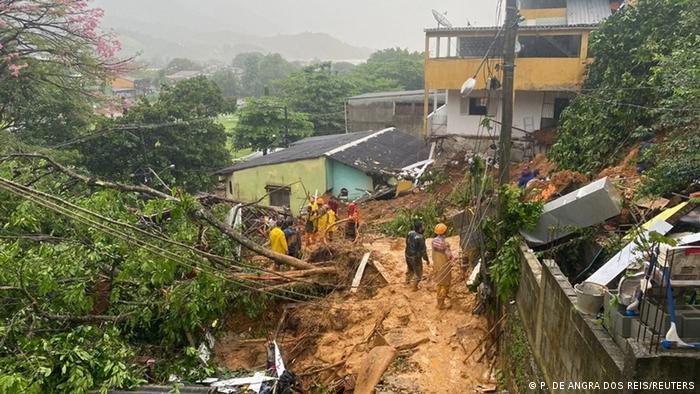 At least 14 people have died in mudslides triggered by heavy rainfall in Rio de Janeiro state in Brazil, state authorities said on Sunday.

Coastal towns and cities along the state of Rio were inundated by heavy rainfall this weekend, while populous regions like Baixada Fluminese of the state were also affected.

Emergency rescue teams answered some 850 calls for help in the last 24 hours and brought around 144 people to safety in the affected regions, state authorities said.

Alexandre Lucas, the secretary for Civil Defense and Protection, was also dispatched to the state of 17.5 million people.


Heavy rainfall this Friday turned city streets into rivers and swept up cars.

The city of Rio was affected by flooding, while other places like Paraty, a scenic coastal town along with Rio state, and Angra dos Reis, a coast city, bore the maximum brunt of intense rainfall.

Paraty received 322 mm (12.68 inches) of rainfall in a day, which is the average rainfall for six months.

Local authorities said at least seven people had died in Paraty, including children.

Streets were blocked by mudslides and entire neighborhoods were without power, officials added.

The town, a tourist destination, declared a state of emergency and expects more rain in the coming days.

In the nearby coastal city of Angra dos Reis, also a tourist destination, authorities declared a "maximum" alert after landslides destroyed homes.

They said that kind of rainfall level had "never before registered in the municipality."

At least six people died in the city, an official tally showed.

Intense rainfall and consequent flooding and mudslides, especially in hilly communities, have killed hundreds of people in Brazil since December.

Deadly landslides killed some 240 people in the Petropolis area of Rio state as recently as February, authorities said on March 23.