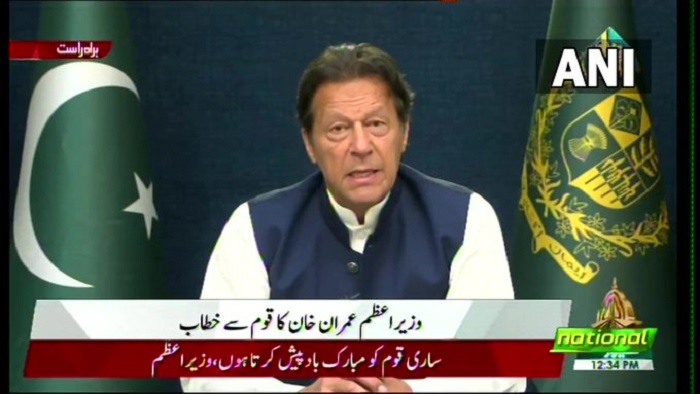 Imran Khan surprised the Opposition to announce in his televised address to the nation that he has advised President Arif Alvi to dissolve all the Assemblies.

Islamabad: Pakistan President Arif Alvi has dissolved the National Assembly on the proposal of Prime Minister Imran Khan on Sunday, with the elections likely to be held in the next 90 days.

Earlier, Imran Khan surprised the Opposition to announce in his televised address to the nation that he has advised President Arif Alvi to dissolve all the Assemblies. Official notification to dissolve the National Assembly has also been issued by the Pakistani President.

The fast-paced development came shortly after National Assembly Deputy Speaker Qasim Suri, who was chairing today's session, dismissed the no-confidence motion against Prime Minister Imran Khan-led government, terming it a contradiction of Article 5 of the Constitution.

"I have written to the President to dissolve the Assemblies. There should be elections in a democratic way. I call upon the people of Pakistan to prepare for elections," Imran Khan said in his address to the nation.

"I congratulate every Pakistani on the Speaker's decision. The no-confidence motion was a foreign conspiracy against us. Pakistan should decide who should govern them," Khan added.

Pakistan Prime Minister had said that he was given three options ahead of the no-trust vote by the "establishment" -- resignation, holding early elections or facing the no-confidence motion.

The military establishment however had denied the claim and said that it did not bring the Opposition's options, and rather it was the federal Government that telephoned the top brass while asking for a meeting to discuss the ongoing political scenario, local news reported.

The Chief of Pakistan Army Staff General Qamar Javed Bajwa and the Directive General (DG) of Inter-Services Intelligence (ISI) had met Pakistan PM on Wednesday at the request of the ruling government, according to local news agencies citing sources.

The MQM on Wednesday announced that it had struck a deal with the opposition Pakistan People's Party (PPP) and would support the no-trust vote in the 342-member National Assembly.