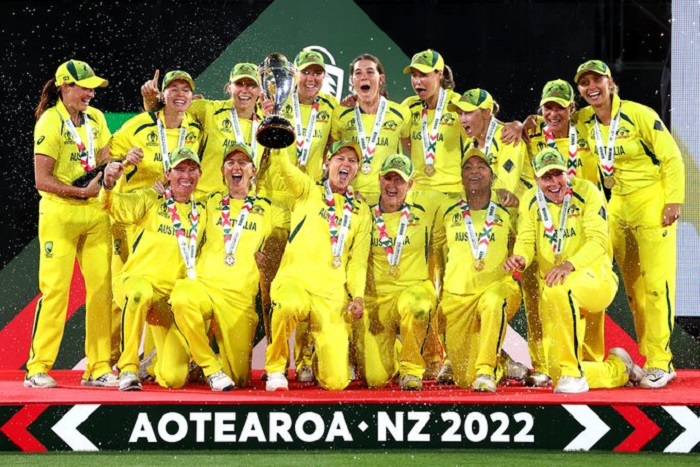 Healy played a brilliant knock of 170 while Haynes and Mooney scored 68 and 62 runs, respectively, to take Australia's total to 356/5 in the first innings.

Christchurch: Australia are crowned the champions of the 2022 ICC Women's Cricket World Cup after beating England by 71 runs here at Hagley Oval, Christchurch on Sunday.

The bowlers did a splendid job for Australia to bowl England out for 285 after Alyssa Healy's sensational 170 had helped them to a score of 356/5 to win the World Cup for the record-extending 7th time. Megan Schutt gave Australia the perfect start in their defence of 357 in the Final. Bowling an absolute peach of a delivery, the inswinger was too good for Danni Wyatt, as she was bowled for just 4. Schutt struck again, trapping Beaumont plumb in front of the stumps to get her prized scalp for 27 as England found themselves reeling at 38/2.

Skipper Heather Knight joined by Nat Sciver, stitched together a 48-run partnership, steering England out of troubled waters. Alana King then worked her magic again in the 15th over of the innings as Heather Knight was lbw in the sixth delivery, walking back for 26. Amy Jones was next to fall for 20.

Sciver would bring up her fifty, but England had a mountain to climb in the remainder of their innings. Wickets kept falling for the English team as Sciver kept on fighting, bringing up her second century of the 2022 World Cup against the same opponent. She would be brilliantly supported by Charlie Dean, as the pair embarked on a 65-run stand.

Dean's knock of 21 would finally end as Ash Gardner as a misguided reverse-sweep was caught at short third by Jess Jonassen.

Australia's moment of glory finally arrived in the 44th over, as Anya Shrubsole holed out to Jess Jonassen off the bowling of Ash Gardner, Meg Lanning's troops erupting in joy. It was a brilliant knock by Nat Sciver, who remained unbeaten at 148, to register the third-highest ever score in a 50-over World Cup final.

Earlier, a brilliant display of batting by Alyssa Healy, Rachael Haynes and Beth Mooney gave Australia an upper hand over England in the first innings of the summit clash of the ongoing ICC Women's ODI World Cup,

Healy played a brilliant knock of 170 while Haynes and Mooney scored 68 and 62 runs, respectively, to take Australia's total to 356/5 in the first innings.

Healy not only compiled her own highest ODI score in smashing 170 from just 138 deliveries against England but also registered the biggest score by a man or woman in a World Cup decider.