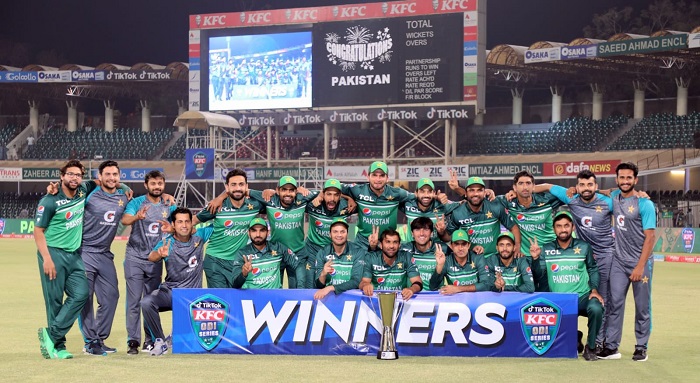 Pakistan claimed victory in the three-match ODI series against Australia.

With this win, Pakistan claimed victory in the three-match ODI series against Australia, with a lead of 2-1. Opting to bowl first, Pakistan had the best start possible as they dismissed Australian openers Travis Head and Aaron Finch for zero runs. It was followed by Marnus Labuschagne's wicket by Haris Rauf, with the team's total at 6/3.

Marcus Stoinis and Ben McDermott tried to anchor the innings but the former got caught by Imam-ul-Haq on Zahid Mahmood's delivery. McDermott also departed on Mohammad Wasim Jr's delivery with only 67 runs on the board.

It was later Alex Carey and Cameron Green who joined hands and took the visitors to the 140-run mark. But their happiness could not last long as Green got bowled out by Mohammad Wasim Jr after scoring 34 runs. Carey also departed after scoring 56 runs, with the team's total at 155/7.'

Jason Behrendorff and Nathan Ellis were also sent back to the dugout by Shaheen Afridi and Mohammad Wasim Jr, respectively. Later, Sean Abbott and Adam Zampa came to the crease and kept the scoreboard moving for Australia.

The duo took their side cross the 200-run mark before Abbott fell prey to Haris Rauf's spell, which also ended Australia's batting run at 210.

Chasing 211, Pakistan lost an early wicket of Fakhar Zaman at 24/1, who got caught by Labuschagne on Nathan Ellis' delivery. Later, skipper Babar Azam came to the crease with Imam-ul-Haq and the duo thrashed the Australian bowlers at every corner of the ground.

Babar scored 109* and Imam played an unbeaten knock of 89 runs and took Pakistan to the nine-wicket victory in just 37.5 overs.