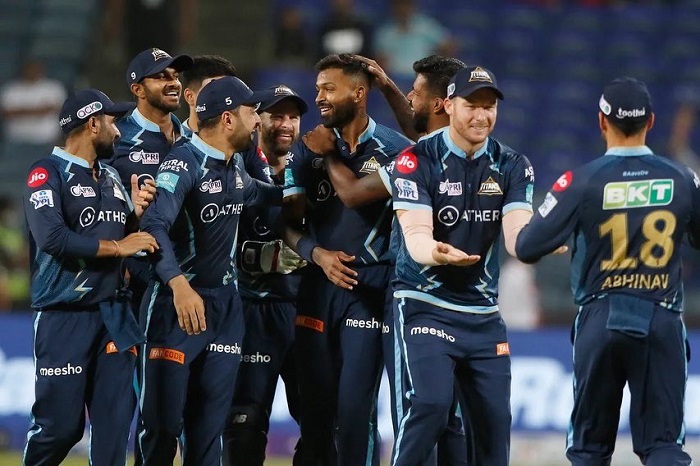 Hardik Pandya led side Gujarat Titans registered their second win in two matches of the season.

Chasing 172-run target Delhi Capitals did not get an ideal start as skipper Hardik Pandya dismissed Tim Seifert in the very first ball of his bowling spell. In the fourth over Lockie Ferguson was introduced into the attack and the Kiwi pacer struck twice dismissing Prithvi Shaw for 10 and Mandeep Singh for 18 to leave Delhi tottering at 34/3.

Delhi needed a partnership and captain Rishabh Pant along with Lalit Yadav did exactly that taking the team's total beyond the 50-run mark in the seventh over.

Pant-Yadav pair struck a fifty run partnership in just 34 balls. The 61-run partnership was broken as Lalit Yadav was run out for 25 to leave Delhi at 95/4.

Rovman Powell joined his captain and Pant batted aggressively to take Delhi's total beyond the triple-figure mark. Ferguson got his third wicket of the match getting the prized scalp of Pant for 43 from 29 balls. In the same over Ferguson got his fourth wicket dismissing all-rounder Axar Patel for 8 caught behind by keeper Matthew Wade to leave Delhi in trouble at 126/6.

In the next over Rashid Khan dismissed Shardul Thakur leg before wicket for 2. In the 18th over Mohammed Shami came back into the attack to strike two blows of two balls first dismissing Rovman Powell leg before wicket and then Khaleel Ahmed for a golden duck caught by keeper Wade to reduce Delhi to 143/9.

Delhi managed to score 157/9 in 20 overs falling short by 14 runs as Hardik Pandya led side Gujarat Titans registered their second win in two matches of the season.

Earlier in the day Delhi Capitals captain Rishabh Pant won the toss and put Gujarat Titans to bat. Pant justified his decision to play Mustafizur Rahman as the left-arm pacer dismissed opener Matthew Wade caught behind for 1 in the very first over to give Delhi a perfect start.

Shubman Gill and all-rounder Vijay Shankar then struck a partnership and the duo took the team's total to 44 in six overs of Powerplay.

After the Powerplay, Pant introduced Kuldeep Yadav into the attack and the Chinaman bowler dismissed Shankar in his very first ball.

Hardik Pandya joined Gill to take Gujarat's total beyond the 50-run mark in the seventh over. These two notched up 50-run partnership in just 38 balls and Gill went on to score his half-century off just 32 balls and Gujarat Titans managed to reach the triple-figure mark in 13.1 overs.

The 65-run partnership was finally broken as Khaleel Ahmed got the wicket of dangerous Pandya for 31 off 27 balls caught by Rovman Powell.

Gill kept on hitting boundaries and sixes to go past his highest individual score of 76 in IPL.

Khaleel Ahmed got his second wicket dismissing dangerous Gill for 84 off 46 balls hitting six fours and four sixes. Rahul Tewatia joined David Miller in the attack and the duo took the team's total beyond the 150-run mark in 17.3 overs.

Mustafizur Rahman came into bowl the final over and first, he dismissed Tewatia for 14 and then he sent Abhinav Manohar packing for 1 and conceded only four runs to guide Gujarat Titans to 171/6 in 20 overs.