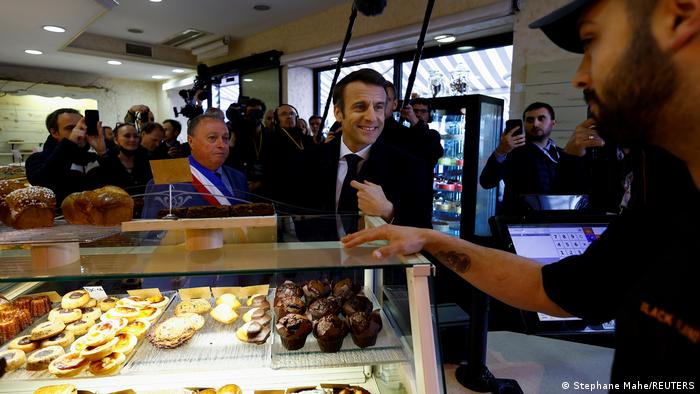 French President Emmanuel Macron is holding his first election rally on Saturday ahead of a first round on April 10, as a study shows four-fifths of voters no longer have confidence in any political party.

The rally comes after several weeks in which Macron has been more focused on international diplomacy over the war in Ukraine than domestic affairs, allowing far-right rival Marine Le Pen to gain ground on issues closer to home for the French public.

How are the candidates doing?


The latest survey by pollster Elabe, published on Wednesday, showed Le Pen winning 47.5% of the vote in a likely run-off against Macron scheduled for April 24. The poll showed Macron gaining 52.5%, a reduced margin of victory compared to the same poll conducted a week earlier.

Le Pen has benefited somewhat from the candidature of Eric Zemmour, another far-right candidate, whose extreme positions on immigration and Islam have made hers seem almost mainstream in comparison.

Macron has gained support in some quarters for what is seen as his strong leadership in international diplomacy amid the Ukraine conflict. However, he has suffered some image damage from the so-called McKinsey Affair, named after a US firm of consultants that was hired to advise the French government on its vaccination campaign during the pandemic, among other things.

The company was accused of tax evasion in a new French Senate report that also questioned the government's use of consultants.

"If she wins, believe me, things will be seriously different for the country ... Her program is dangerous," he warned.

Le Pen herself has been very upbeat about her chances.

On a visit to eastern France on Friday, she said predictions of Macron's easy re-election were "fake news."

"It is perfectly possible to defeat Emmanuel Macron and radically change the politics of this country," she said.

Other candidates in the election, including The Republicans' Valerie Pecresse, Zemmour, the far-left Jean-Luc Melenchon, the Socialists' Anne Hidalgo and the Greens' Yannick Jadot, are widely seen as having virtually no chance of making it to the run-off.

Shift to the right


Macron's rally comes as a study by think tank Fondapol, published on Friday, showed that France is currently in political crisis.

Not only had 80% of study participants lost trust in all political parties, but some 40% no longer felt attached to any movement, the poll indicated.

Just over a quarter of respondents said they would not be voting at all in the April elections.

The study also found that voters were shifting further to the right, with almost half (46%) highly likely to vote for an extreme right-wing or conservative right-wing candidate.

Overall, radical candidates from both political wings are increasingly in favor, particularly among young people, with 54% of 18- to 24-year-olds planning to vote for a radical politician.

The study polled 3,108 registered voters between March 10 and March 14.