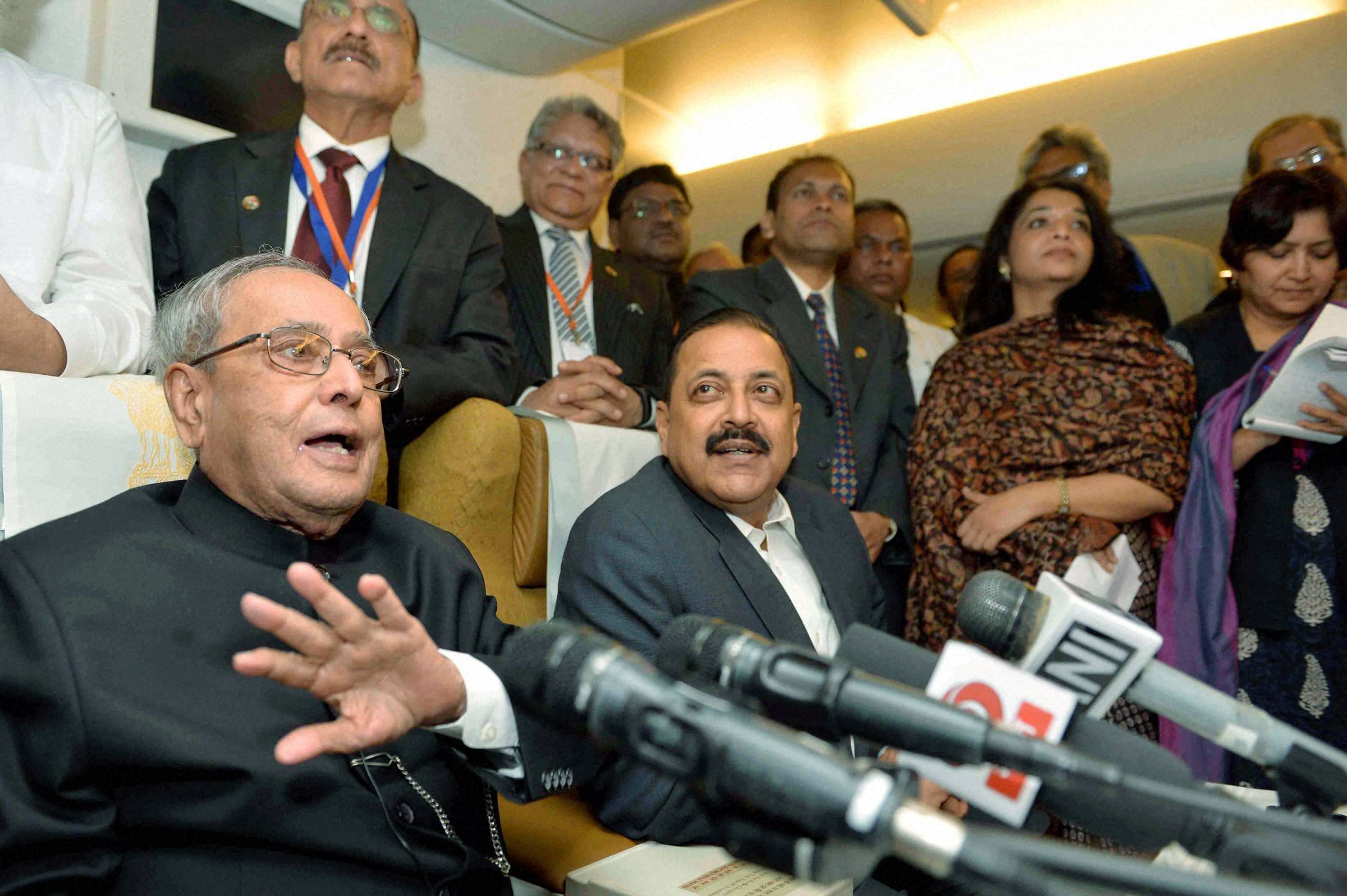 On Board Special Aircraft: India has, in principle, agreed to look into Ghana's request for cooperation in civil nuclear energy field, President Pranab Mukherjee said on Saturday as he wrapped up his six-day visit to three African countries which he said will "reinvigorate" the already "strong and time-tested" bonds with them.
"Although the details are yet to be worked out, in principle, we have agreed that we will examine civil nuclear cooperation," he said on the question of proposal from Ghana seeking cooperation in the field of civil nuclear energy.
The president said, "There are questions of cooperation in technology, cooperation in the supply of raw material, availability of uranium and also in sharing the experiences because we are also new in the area of the nuclear technology."
India has got strong support from the countries he visited -- Ghana, Cote d'Ivoire and Namibia-- on the urgent need for reforms in the United Nations Security Council.
"There was agreement that the present structure does not reflect current realities and that reforms have been delayed for too long. "The leaders of all three countries expressed the view that there is a need for urgent reforms of the UN. India, with one-sixth of the world's population, as well as the African continent must be represented in the UN Security Council," Mukherjee said.
The president also underlined the issue of international terrorism and dangers posed by it to the civilised world.
"I conveyed that the scourge of terrorism must be fought jointly, without any distinction between 'good' and 'bad' terrorism. "I called for an early conclusion of negotiations on the Comprehensive Convention on International Terrorism," he said.
India has also got assurance from Namibia that it will work towards ironing out issues which are hindering the implementation of an agreement with it for supply of uranium for peaceful nuclear energy use, he said.
"We have already entered into an agreement with Namibia on supply of uranium. Up to now that has not been done so I requested the President to take special care to meet the commitment of the past President and he agreed and also it was suggested that two technical teams will exchange details as there are various lack of understanding or misunderstanding about the supply of uranium," he said.
Mukherjee said some believe that one has to be member of NSG to supply uranium which is not correct and he pointed that out during bilateral talks with Namibia. "Therefore it is not a new agreement. Agreement has already been signed. Supply of uranium has not taken place that's why I raised this issue and I requested the President to look into it and twice he assured," he said.
The president also emphasised on improving connectivity or opening new lines of connectivity with African countries as it is one of the most important aspects of improving relationship.