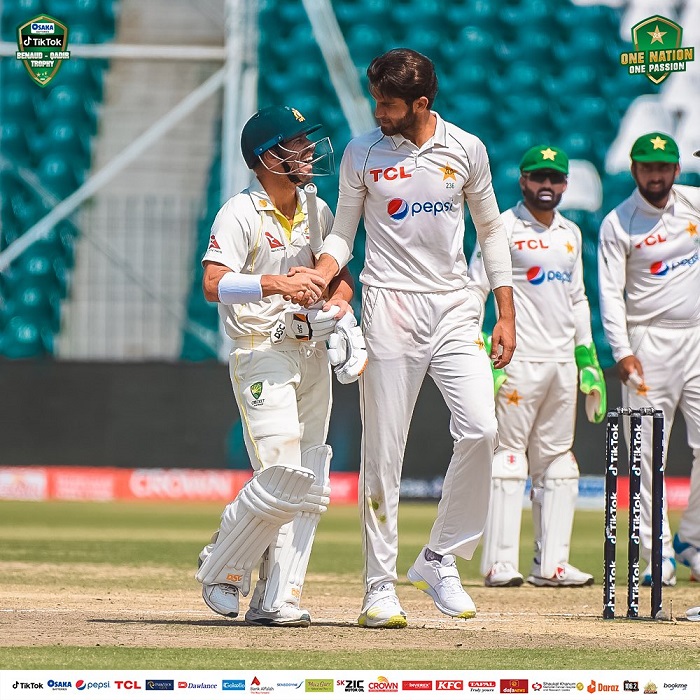 Pat Cummins made a sporting declaration shortly after tea on the penultimate day to set Pakistan 351 runs target.

Lahore: : Pakistan openers Imam-ul-Haq and Abdullah Shafique produced the third half-century stand of the three-match series on Thursday to set up an intriguing and mouth-watering fifth and final day of the decisive Test against Australia in Lahore.

After Pat Cummins made a sporting declaration shortly after tea on the penultimate day to set Pakistan 351 runs target, the left-and-right hand combination of Imam and Abdullah had taken the home team to 73 at the draw of stumps without being separated.

When play will resume on Friday morning with Imam on 42 and Abdullah on 27, Pakistan will require another 278 runs to win their first series against Australia on home soil since 1994.

In contrast, Pat Cummins will aim to match the accomplishments of Richie Benaud and Mark Taylor. Benaud had inspired Australia to seven wickets victory over Pakistan in Lahore to wrap the two-Test series 2-0, while in 1998, Mark Taylor's side defeated Aamir Sohail's team by 1-0.

In the scenario of a drawn Lahore Test, it will be the first time in 26 series between the two countries that a three-Test series will end at 0-0.

Usman Khawaja, who began this morning at seven, returned undefeated on 104 in what was his second century of the series and 12th of his 49-Test career. Khawaja's previous scores in the series were 97, 160, 44 not out and 91.

On Friday morning, Pakistan will arrive at the Gaddafi Stadium requiring 278 runs to win the Test. All in all, a magnificent, highly-entertaining and nerve-wracking fifth day's play is on the card in the first series between the two sides on Pakistan soil for 24 years.